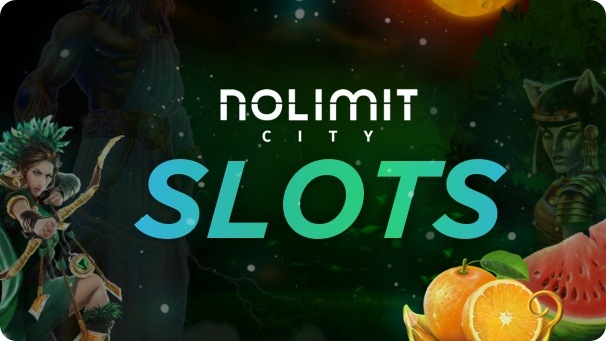 Try removing some of your filters to find more slot games, or reset all

As an online slots player, you are showered with choices of games to play. However, you know quite well that not all slots are of great quality and not all slots can deliver great prizes. That’s where we come in. We review the software developers themselves, and their slots, to deliver to you useful information and help you choose the right games for you at your favourite online casino.

Our team is dedicated to providing slots game players with all the details about the slots creators. In this article, we focus on a developer that has been around for six years now, but which has achieved a lot in the online gambling industry, Nolimit City. Its slots are world-class, so, stay tuned in order to discover more about them!

Nolimit City, as introduced, is a slots software developer that has received quite the attention in online gambling relatively fast. It's been on the market since 2014, but considering its team consists of experts with decades-long experience in the industry, it has managed to get quickly on the top of the list of great software developers.

You may find it like Nolimit City on some pages, but you should know that it is the same developer. Established six years ago in Malta, Nolimit City Ltd has opened offices all over the world, expanding to Sweden and India. During the time the developer has been active on the scene, it has managed to release more than 30 slot titles,, which is more than a great number for a developer that has been around for only six years. To add to that, its titles are highly regarded by both industry experts and players.

It is precisely because of this reason that Nolimit City shows a sign of constant growth. It is getting more and more traction by partnering with some major casino operators in Europe and the UK, mainly due to the fact that it has its own platform and handles game integration itself. It also offers operators a back-office with various tools, such as customizable tools to run promotions for their players based on Nolimit City slot games, usually for popular titles like Thor, Starstruck and Wixx. And all of this has helped the developer to become fully independent and not rely on third-parties or any other middlemen to distribute its games.

Contrary to many other leading software developers, Nolimit City hasn't ventured into other casino products and is only concentrating on slot games. Just like Elk Studios, Quickspin and Thunderkick, it is pushing the boundaries with some of the most innovative slot themes and quirky design, as well as fresh features and game mechanics. This is clear when you load its titles like Pixies Vs Pirates, Dungeon Quest, Hot 4 Cash, and Mayan Magic Wildfire. The developer is also enthusiastic about its social media presence, so don’t be surprised to see that you have access and can stay up to date with all Nolimit City games releases, news and other developments on Instagram, Facebook and LinkedIn.

How Safe are Nolimit City Games?

Considering Nolimit City Malta is fully licensed by the Malta Gaming Authority, and holds a license to develop games by the UK Gambling Commission, you can rest assured that all of its games are safe to play.

Add to that the fact that it is also certified to offer its games in the Latvian, Swedish and Estonian regulated markets, and that it has its RNG tested by trusted third-party auditors, and you’ll realize that there is nothing unsafe about them.

But, when you see that its games are featured across the majority of recommended and trusted UK slot sites, you will be convinced that it is, indeed, a developer you can put your trust in.

When you explore leading Nolimit City casinos and go through its game selection, you will see that there are some titles by the developer that really stand out, out of the 31 in total. Punk Rocker, Casino Win Spin and Tractor Beam are only some of these games.

With an electric theme, Tesla Jolt, naturally, is a tribute to the inventions of Nikola Tesla. The 20-payline slot delivers features like Tesla Spins, Charged Wilds and Time-Lapse Trigger. It is playable across all tablets, smartphones and desktop devices, just like all of Nolimit City slots, and it arrives with a payout potential of 582x the stake.

Kitchen Drama: BBQ Frenzy, on the other hand, is a food-themed slot inspired by the American barbecue, which features Wild BBQ Spins, Fiery Chilly Spirit Spin and Gunsmoke, features that can take you to 1,050x the stake max payout. The other slot from the food-inspired series is inspired by the Japanese cuisine and culture, packed with features like Wild Sushi Free Spins, Bunshin Wilds and Kamisabi Attack. The slot arrives with a 96.77% RTP and 697x the stake payout potential.

Oktoberfest, as implied by its title, is a slot that pictures the world-known festival that takes place in Germany. With theme-fitted features like Bierfest Free Spins and Prost Win-Spins, as well as Pretzel Party Spins and Party Spins, this 20-payline slot comes with a 96.75% RTP and can deliver prizes of up to 500x the stake.

Moving on, from some of the developer’s most recent hit titles, we can mention The Creepy Festival, Ice Ice Yeti and Owls.

The Creepy Festival is also a 20-paylines slot, where fortune tellers, a carnival director, tigers and strong men roam the reels. In typical carnival-style, the slot has a creepy vibe, but its gameplay is rather simple. All you need to do is land Wilds to get more winning combos, and Scatters, to trigger the Free Spins. The Star Spins can deliver some excellent prizes, too, if you manage to activate them.

Nolimit City Ice Ice Yeti, on the other hand, is a rather different slot, since it comes with 16,807 ways to win across a 5x7 reel area. With features like Yeti Shake and Ice Ice Respins, this yeti-inspired slot can be quite fun and rewarding to play, as it can deliver a payout of up to 8,820x the stake!

We left the best for last, Owls. This slot is a real masterpiece in terms of visuals. The developer has managed to portray the enchanted forest outstandingly, with all the owls present on the reels looking as if they came out of a fairytale. The 15-payline slot is packed with features, including Scatter Loot, and Dream Spins, which randomly deliver Ember Dream, Emerald Dream or Frozen Dream Free Spins modes, each arriving with a Stacked Wild on the middle reel.

Compared to its early days, Nolimit City nowadays releases way more slots than it used to. There’s a new slot game release every month, and players and operators are equally happy about that. They’re especially happy about the most recent releases, such as Punk Rocker xWays, Monkey Gold XPays, Buffalo Hunter, Deadwood xNudge, Harlequin Carnival and Barbarian Fury. As you can see, each of these new slots feature an exciting theme, definitely worth your attention.

Even though Nolimit City hasn’t released any jackpot games as of yet, expectations are that some new developments in this field were to happen in 2022.

Before you join any of the best Nolimit City casino sites that we at SlotSource recommend, you should know that you have an excellent opportunity to try out the developer slots for free first. You can try out the bespoke Turstugan, Space Arcade, Coins of Fortune, and Poison Eve for free, to see how well they play and how easy is to trigger all of their features.

The developer has ensured to create demo mode versions of all of its slots so that you can try them out first before you commit to real money gameplay. Keep in mind, though, that due to UKGC restrictions, UK free slots are not available on the UK market.

When you go to Nolimit City’s official website, to try out the games, you will be asked whether you’d want to try them out on your tablet, smartphone or desktop device. That’s because the games have been specifically created to fit any device screen size. They have been optimized for play on each device, with any operating system.

Nolimit City slots are flexible games that can easily load on any device. You can play them wherever you are, whenever you want. Be it on your desktop device while you’re at home, or on your tablet or smartphone while you’re out, you can play all of its mobile slots at your convenience.

As explained earlier, operators that partner with Nolimit City have the opportunity to craft promotional offers for their players, to enjoy the developer’s slots with a bonus. The online casinos that support the developer’s slots, therefore, can offer all kinds of bonuses that players can use for Nolimit City slots, in addition to slots by other popular developers. Before you claim any such bonus, though, make sure you read the Terms and Conditions of the offer, to check out whether the bonus is for a particular slot by the developer.

Needless to say, if you want to enjoy the best Nolimit City slots with Free Spins, you can choose a casino from the SlotSource’s list. You should be able to find a promotional offer that would offer Free Spins as a part of a special campaign or a Welcome package, for you to use on Nolimit City slots.

If what you learned about Nolimit City’s slots seems intriguing, fun and interesting, and you like what these games have to offer, you will be pleased to hear that several other developers develop slots which are a lot like Nolimit City slots.

NetEnt is the master of slots, especially when it comes to innovative features, just like Nolimit City. Microgaming is the pioneer, the name behind most iconic slots, features and game mechanics, a developer whose games you must try at least once in your lifetime. Elk Studios, on the other hand, is a mobile-first platform that develops slots fitted for players interested in mobile play only.

But you can rest assured that as soon as it does, if or when it does, you will be the first one to know about that. We are monitoring the market, and we’re always the first to inform our readers about any news, as soon as released. So, stay up to date and wait to hear from us!