Volcano Riches is a Quickspin game with stacked symbols that are four rows high and that don't pay better than 2x your bet, with the exception of the Volcano Girl symbol that ... Read Full Review 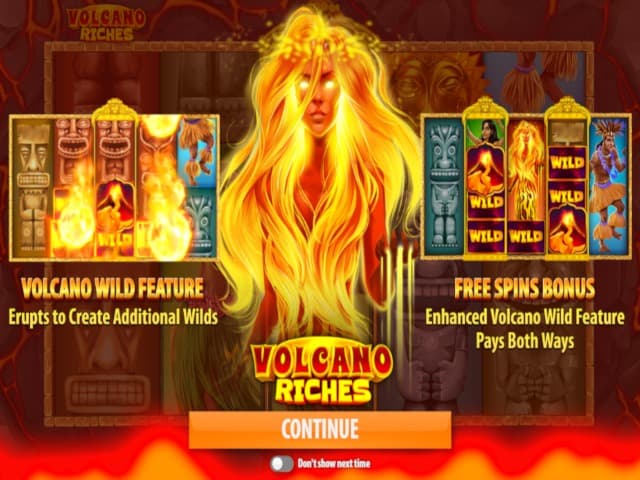 Volcano Riches is a Quickspin game with stacked symbols that are four rows high and that don't pay better than 2x your bet, with the exception of the Volcano Girl symbol that can pay 25x. This slot game has a free spins feature with 10 free spins that pay both ways, and a Volcano Wild Feature that puts up to 4 more Wilds on your board. It's a high variance game that does offer a chance of a decent win.

The game is as easy to set up as most Quickspin games, as with these 40 fixed paylines the only thing you need to do is to choose your bet from 0.20 to 100.00 per spin. There is also a Fast Play button and an Autoplay button, and you can also examine the paytable and the game rules if you click the ladder icon on the left.

The game features a total of ten symbols. The paytable starts with four Totem symbols which are four rows high, and these can pay 1x your bet at best, if you land five-of-a-kind. Two of the three main characters aren't better either as they can pay 2x your bet, but the Volcano Girl will pay 25x for five-of-a-kind. These three symbols are also stacked four rows high. Only the special symbols appear on one position only – Wild, Volcano Wild and Bonus Scatter.

All the symbols are beautiful and this is one of Quickspin slots with the best graphics. The game looks great on all devices, and Volcano Girl is the best looking symbol though the others aren't bad either. It's also good to see the four Totem symbols as dull as they are, as they allow the main symbols – Volcano Girl, Volcano Wild and Bonus Scatter - to stand out.

Volcano Wild only appears on reel 3 in the main game, and on reels 2 and 4 in the free spins game. It initiates the Volcano Wild Feature, which means you'll get up to 4 more Wilds that will be randomly placed on your reels on adjacent positions. Bonus Scatter appears on reels 2, 3 and 4 in the main game only and you need to land all three to get the 10 free spins that can't be re-triggered. During the free spins game, the 40 paylines will pay both ways, but you will again have to hope for these big stacked symbols to align properly in order to even land a winning payline.

The game has theoretical return to player (RTP) of 96.43%, which is more or less good enough, but it's questionable if you want to go through the steep learning curve and the high variance in order to get only 96% or so. Most spins are non-winning ones and the paytable is skinny, so there are very few ways in which you can land a big win in this game. The one and only thing to look forward to is a full board win, made possible by stacked symbols, and the best possible prize is 1000x your bet if you land a full board of Volcano Girl symbol. Other than that it's not really possible to win big.

While absolutely gorgeous to look at, Volcano Riches is a difficult game to play as it feels very tight and the paytable doesn't offer a chance of landing a big win by simply getting five-of-a-kind of some powerful symbol. Quickspin has many other good slots you can play, such as Big Bad Wolf or Genie's Touch, and it's unlikely anyone will be playing Volcano Riches regularly. If you do want to try it out on the go, check out our list of the best mobile casinos.