Did you know that it used to be commonplace for our Viking cousins in Scandinavia to grab a sword, head out into the wild and not come home until they had the ... Read Full Review 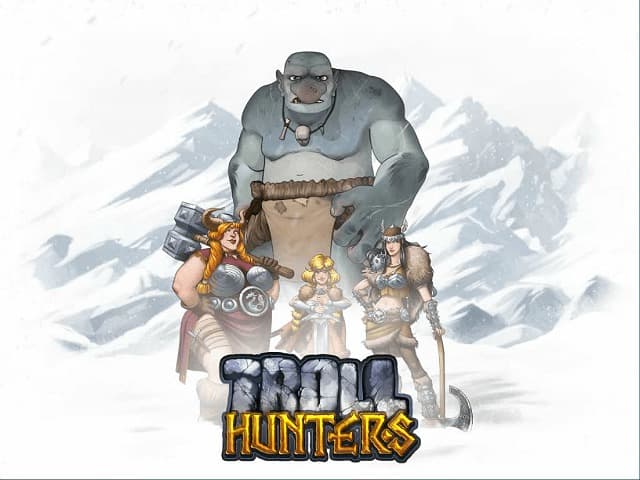 Did you know that it used to be commonplace for our Viking cousins in Scandinavia to grab a sword, head out into the wild and not come home until they had the head of a troll in their rucksack? Or perhaps it wasn’t. Either way, Troll Hunters – a rather epic Play’n GO slot with cascading reels – celebrates this fascinating yet wholly fictional obsession with all things troll with some truly innovative gameplay.

The first you’ll notice about the Troll Hunters slot game is that it employs a 5x5 cascading grid configuration. Instead of the symbols spinning on reels, they simply fall neatly into the game on top of one another from above. This innovation makes for a completely different playing experience as it means you need to land at least three symbols in a row – horizontally or vertically – to win.

The game’s storyline focuses on three female Nordic warriors as they embark on a quest to hunt down a rather ugly-looking troll (you’ll not see any of the cute little Dreamworks imposters here). The cartoon-style visuals are very easy on the eye, with crisp-looking images of our brave warriors standing proudly in front of a chilly background of foreboding mountains. The animated snow is a nice touch, as is the way the reels frost over whenever the creepy troll makes an appearance. The audio accompaniment is pretty good too, with chirping birds, babbling brooks and gentle winds all helping to set the scene.

You can deposit as little as 20p or invest as much as £100 per spin to join in the hunt.

Because of the way it’s set up, there aren’t really that many different symbols in the Troll Hunters slot machine. So, along with the three troll-hunting gals, you’ll only get to see silver earrings, skull tankards and great big Henry VIII-style hunks of meat. Keep an eye out for the golden rune, though – this is the game’s wild.

The cascading 5x5 grid-based gameplay (i.e. making horizontal or vertical matches of at least three symbols) is undoubtedly Troll Hunters' key feature. It’s important to note though that each time you make a match, the symbols involved disappear and a wild gets created in its place. This means new combos can then be created with more even wilds generated in the process, proffering plenty of modest wins in relatively brief periods of time.

You’ll need to keep an eye on what’s happening behind the reels during play, too, as you’ll sometimes see parts of the word BONUS spelled out vertically. If you manage to uncover the whole word then you’ll trigger a free spins round. Here you’re granted eight free spins on a separate set of reels where every Viking-themed symbol (battle axes, shields, swords, etc) is a scatter. This is a more traditional-looking affair (no disappearing symbols or wilds here) requiring you to land at least five matching symbols to win. Landing five or more troll symbols awards five additional spins (up to a maximum of 20).

With so many slots now available online, it can be a challenge to find a genuinely original game. Happily, Play’n GO has managed this with Troll Hunters. The innovative cascading reel format keeps you interested as it never gets dull seeing win after win come your way. The bonus feature, which plays very differently to the base game and offers some whopping payouts is most welcome, too.