Michael Corleone spoke the truth when he said that entertainment is a big factor in drawing gamblers into the casinos. That's the spirit that underlines The Slotfather online slot game – a ... Read Full Review

Play The Slotfather for Free Now! 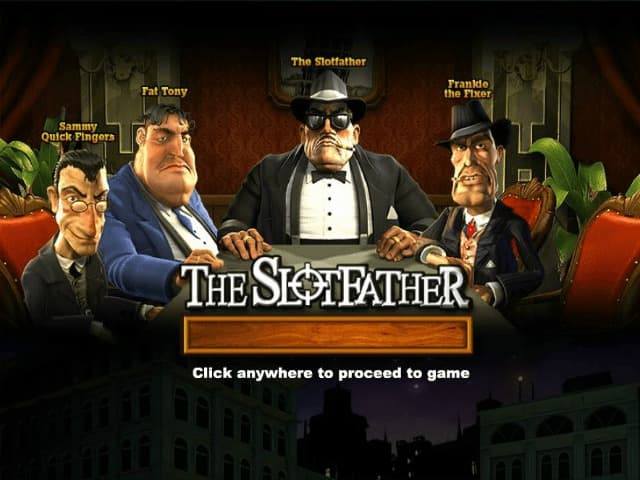 Michael Corleone spoke the truth when he said that entertainment is a big factor in drawing gamblers into the casinos. That's the spirit that underlines The Slotfather online slot game – a five-reel, 25-payline progressive jackpot based around the archetypal Mafioso father figure. Software provider Betsoft puts a humorous cartoony spin on the criminal enterprises of the mafia, offering a high-stakes spin and a tempting progressive jackpot. Read through The Slotfather review to see whether you want to become part of the family or swim with cement shoes.

About The Slotfather Slot Game

The Slotfather software provider Betsoft has taken the classic Godfather subject matter and made it a touch more friendly with a cartoon-style animated characters. These caricatures of Italian-American crime families populate the reels, keeping you on your toes. The opening intro animation is a riff on the Francis Ford Coppola film, with the tagline “I'll offer them a jackpot they can’t refuse.” Even the music is a light orchestral track reminiscent of the soundtrack from the film.

The game follows the rise of The Slotfather as he tries to place his slot machine games in all the local nightclubs, bars and shops. The game begins with the Slotfather welcoming you into the family. From here, you have to help him build up his slot empire. The better you do, the more he'll reward you. With a high return-to-player (RTP) rate of 95.69%, plus the progressive jackpot, this is one hell of a lucrative online slot.

The Slotfather features a number of slot game symbols inextricable from organised crime and its mob bosses, including newspaper headlines, Cuban cigars and Tommy guns. To drive home the mafia’s link to Italy, it has a map of the country, spaghetti with meatballs and a bottle of Italian red wine. This ties to the setting of the game, which takes place in an Italian restaurant owned by The Slotfather.

The biggest payouts are reserved for The Slotfather’s three enforcers: Sammy Quick Fingers, Fat Tony and Frankie the Fixer, with the latter paying out 200 times the original bet if he appears on all five reels of a payline. Each of these three lieutenants offers a bonus based on their neighbouring symbols. For example, if Sammy Quick Fingers appears on reels one, two or three next to the briefcase of cash symbol, it triggers an instant win as he snatches the cash. Likewise, if Frankie the Fixer appears alongside the Tommy Gun symbol, he grabs the gun and fires bullets at you, creating holes in the reels. Click on one to reveal up to ten free spins plus a win of 30 credits. Fat Tony doesn't have a pairing symbol, but landing three or more of the hungry Mafioso anywhere on the reels starts the Underboss Scatter bonus round. The word scatter appears on all of the symbols currently in play, transforming them into Scatter Pay symbols.

The main bonus round is reached by hitting three Slotfather symbols on an active payline. The reels disappear to reveal a corner of the city, where you have to choose three out of six businesses to install the Slotfather’s machines. After making your choice, you'll return to your seat at the restaurant table, where the Slotfather will pay you your bonus.

The Slotfather progressive jackpot can only be won if you manage to land five of the Slotfather symbols on any of the paylines. The amount that's currently up for grabs can be found in the jackpot network window at the top left-hand side above the first reel. It can range from a few hundred to tens of thousands. Ready to talk business? Try your hand at The Slotfather from Betsoft and see what rewards you can earn from the boss himself.