Nolimit City has been one of the industry’s stand-out developers in recent years. As well as offering an array of innovative gameplay features, the company has also made a name for itself ... Read Full Review

Play The Rave for Free Now! 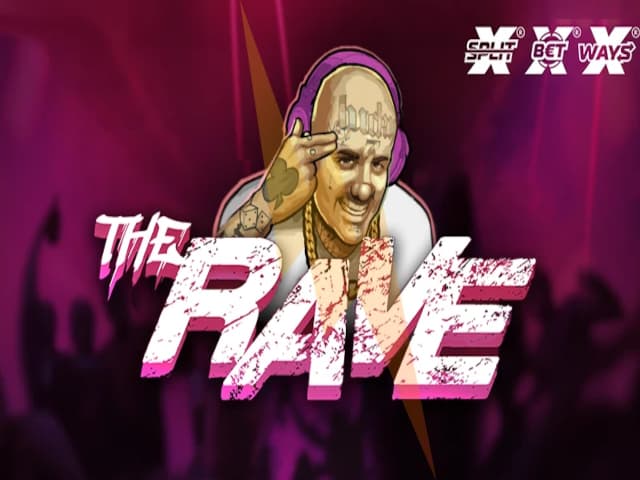 Nolimit City has been one of the industry’s stand-out developers in recent years. As well as offering an array of innovative gameplay features, the company has also made a name for itself by tackling different themes, many of which, it’s fair to say, have been quite dark. Over the last few years, we have seen slots about gulags, prisons, cannibalism, asylums, and even some public hangings. The company has opted for a change of pace with its latest title, The Rave. While anyone who’s ever attended a rave will know that things can get pretty twisted, this is all about the good times. So, dust off your shutter shades and your neon-face paint, because it’s time to party at the top-rated online slot sites!

The Rave looks and feels exactly as you’d expect a rave-themed title from Nolimit City to look and feel. The whole thing is dripping in neon, with a selection of wild-looking raves occupying the reels as symbols. A DJ sits above the reels, while soundbars sit on the left-hand side, really capturing the party spirit of the slot. Other rave essentials like lollipops and shutter shades also make appearances. In fact, this might be the first slot we’ve ever encountered that comes with a strobe lighting warning. The slot then doubles down on the theme with a dance-inspired soundtrack that really gets you in the mood and can be a great accompaniment while you’re hitting the Spin button.

How to Play The Rave Online Slot

Getting the party started with The Rave is not too difficult. The game has a similar set-up to most top online slots. There are five reels and three rows in the game, with 243 ways to win in the base game. This can increase thanks to some of the modifiers that are active in the slot, with the exact number that can be triggered not being disclosed by Nolimit City.

The dollar icon in the corner of the screen will open up the betting options for players. The game can be played for a big range of stakes between €0.20 and €100, which is a fairly standard betting range.

Most mobile slots casinos will now support mobile play, so players should have no issue finding somewhere to play The Rave mobile slot. The game can be played across all devices, meaning you can take it out and about with you providing you have a stable internet connection.

As always, the party really gets going with the bonus features. There is a lot to unpack here, so we will start with the Enhancer Cells, each of which is making a reappearance from previous Nolimit City slot games.

xWays is a modifier, which has been a huge hit for the company. When this lands, it will reveal up to 6 of one symbol and expands the height of the reels to accommodate. This can seriously boost the number of ways to win on a spin. xSplit Wilds also make an appearance here. When these land, they will split every symbol on the grid into two. When two of these land, it will become a Double xWays Wild. This will then fill an entire reel as a Stacked Wild and can be worth up to 11 Wilds at once.

When players land two of the Scatter symbols, which say Drop the Bass on them, they will trigger one of the enhancer symbols. When they land three or more, they will trigger either the Murder on the Dance Floor spins, or the God is a DJ spins. Three and four give 7 and 8 Murder on the Dance Floor spins, while five give 10 God is a DJ spins.

In the Murder on the Dance Floor spins, four enhancer symbols are placed on the bottom reel throughout the duration of the spins. Whenever a character lands in these spins, a multiplier is activated. There are also three modifiers that can be triggered in this round:

The God is a DJ round is basically just a step-up from the Murder on the Dance Floor bonus, with the game dropping five enhancer cells on the reels. In both rounds, if a Split Symbol lands on reels 2, 3, and 4, it will increase the multiplier of the reel by +2x.

In some territories, an xBet Feature will be available. This will see players add 20% on top of their stake, with a guaranteed Scatter on the second reel.

Nolimit City has even given its maximum win a name and a little animation. Busted is when players hit a 41,500x the overall stake win. One way to instantly hit this is to fill the reel with xWays Wilds. The RTP of the slot is 96.09%, with this increasing with different bonuses and modifiers active.

In the words of S Club 7 – there ain’t no party like a Nolimit City party. The company knocks it out of the park once again with The Rave slot game. Everything about the slot works, from its unique and memorable design to its collection of great bonus features and reel modifiers. Several old favourites make an appearance on the dance floor, with the company remixing them with some great new hits too. This is a party you will definitely want to be on the VIP list for at the newest slot sites.

Who made The Rave online slot game?

The Rave was designed and developed by Nolimit City. Nolimit City is a hugely popular and innovative online slot developer with a collection of great slots in its portfolio, including Punk Toilet, Folsom Prison, Infectious 5 xWays, and Mental slots.

Are there any Free Spins in The Rave slot?

Yes! There are two different Free Spins Bonus Rounds in The Rave – the Murder on the Dancefloor Spins and the God is a DJ spin. These both come with slightly different features, with Reel Enhancers being involved in both.

What does Busted mean in The Rave slot?

When you hit the Busted screen in the game, it means you have hit the maximum win of 41,500x your stake. This can be triggered instantly by filling the reels with Double xWays Wilds.

What is the most I can bet in The Rave?

The maximum amount that can be bet in The Rave slot game when playing for real money is €100. The minimum bet that is on offer here is €20.

What other slots are similar to The Rave?

Nolimit has used several of its most patented gameplay features and mechanics in The Rave. This includes the xWays and xWays Wild symbols. You can also find these, and similar features, in games like Karen Maneater, Remember Gulag, and other Nolimit titles.

Can I buy a bonus in The Rave slot?

Yes. Players can buy a bonus in The Rave slot by using the Nolimit Bonus option. They can also use the xBuy feature. This allows players to wager an extra 20% on top of their bet in order to add a scatter to the second reel in the game. This feature may not be available in all territories.

Where can I play The Rave slot?

The Rave slot will be available in a range of different online casinos. To find the best casino to suit your needs, check out our detailed online casino reviews elsewhere on our site.

Can I play The Rave for free?

Absolutely! In most countries, players will be able to play The Rave slot for free before they commit to playing for real money. However, it should be noted that this is not the case with all territories. The UK, for example, does not allow players to play for free.

Can I play The Rave on my mobile?

Of course! The Rave has been developed using HTML5 technology. This ensures that will it run across a range of different devices including those on both Android and iOS operating systems.

When was The Rave released?