Play The Mummy for Free Now! 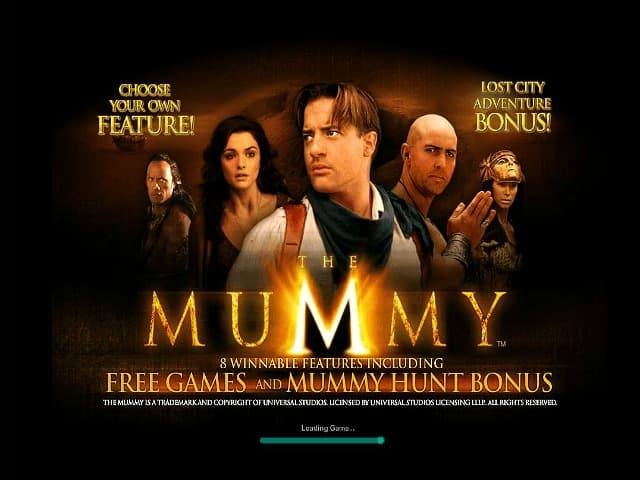 Ready to start digging for gold? Unlock the secrets of ancient Egypt with The Mummy online slot – an exciting five-reel, 25-payline game based on Steven Sommer’s 1999 blockbuster film starring Brandan Fraser and Rachel Weisz and its sequel The Scorpion King, starring Dwayne ‘The Rock’ Johnson. Software provider Playtech has packed the game full of characters and symbols from the film, as well as enough bonuses to make the pharaohs rise up to play this slot. Check out this guide to The Mummy to see whether it’s worth dusting off your wallet.

About The Mummy Slot Game

The Mummy is about to take off again with its most recent movie incarnation featuring Tom Cruise, but it remains to be seen whether it'll have the same scope, scale and sense of adventure as the 1999 film. The Mummy online slot story brings back Arnold Vosloo’s evil Imhotep as he tries to resurrect his beloved. You'll join the adventurous O’Connell family in trying to thwart his plans. Playtech has managed to breathe new life into the old film franchise, drawing on it for inspiration when designing the symbols. The music draws from the game’s Egyptian soundtrack using sitars and lutes to accompany your trek through the desert. Despite the film being two decades old, The Mummy online slot remains a firm fan favourite, largely due to the games features and pyramid-sized return-to-player (RTP) rate of 96.8%.

The Mummy slot game features many of the main cast from the original film, including Rick O’Connell, Evelyn Carnahan and the evil Imhotep. It also features The Rock as Mathayus, the Arcadian who later becomes the evil Scorpion King in the film’s sequel. Rick is the top-paying symbol, with a full payline paying 10,000 times the initial wager. Other symbols include Rick’s pair of pistols, the blue scarab beetle, Egyptian jars, treasure chests and a leather bound book with a golden seal. The disfigured Imhotep is the game’s Wild symbol and appears on the central three reels. The Mummy slot is made even more exciting with the introduction of the Lost City Adventures Bonus, which is triggered randomly during the game. You delve deeper into the lost city of Hamunaptra, picking ancient boxes for cash prizes. Every time you enter this bonus round, the Book of the Dead will open and grant a new game feature.

There are eight game features in total to collect, including Scorpion Scatter, Expanding Mummy, Scarab Attack, Collapsing Reels, Mummy Power and Mummy Respin. These will appear on the left-hand side of the reels and only one can be activated at any one time during the main game. The other two features are not collectable, but will appear during the game if won in the Lost City Adventures. These include the Free Games symbol with super spins. During this bonus round, you take to the skies in an air balloon and if the Free Games symbol appears on reels one, three and five, you'll win some free spins and one super spin. Throughout the round, you can also collect a maximum of nine disfigured Imhotep Wild symbols at the left-hand side. When the Super Spins is triggered, the collected Wilds are cast onto reels two,three and four. The last feature is the Mummy Bonus hunt symbol. If this appears anywhere on reels one and five, you begin your descent into the depth of the pyramid. Pick which direction to go, kill any mummies you meet, pray you don’t hit a dead end and you won't go home empty handed.