Rage to Riches is a 2015 slot game by Play'n GO that offers cascades, win multipliers, free spins, as well as a game in which your monster will be destroying the buildings ... Read Full Review 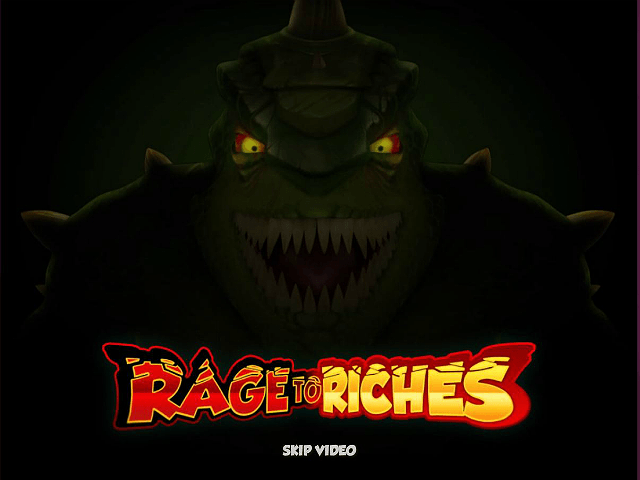 Rage to Riches is a 2015 slot game by Play'n GO that offers cascades, win multipliers, free spins, as well as a game in which your monster will be destroying the buildings in the city, winning coin wins for you! Rage to Riches has excellent theoretical payout and a medium variance so it remains a popular choice among Play'n GO slots.

You adjust your bet by opening the console where you can choose the number of coins per payline, from 1 to 5, and the coin value, from £0.01 to £1. The 20 paylines are fixed, so that gives a range of total bets from £0.20 to £100, which most players will be happy with. Autoplay can be set up on that same screen, but if you don't want to use it then you'll simply exit the screen and click the Spin button.

This is a cascading blocks game, so whenever you land a win the winning symbols will disappear and will be replaced by some new ones. The game doesn't offer consecutive wins very often, but with each cascade the win multiplier rises – x2, x3 and x5 are the values – so there's a chance you could get a big win through this game mechanics, but you really need to get lucky to get three wins in a row in this game.

There are only eight normal symbols in Rage to Riches slot, and they all play an important part in the game, as the top three symbols are three monsters that resemble King Kong, Godzilla and Werewolf, and the five card symbols are used to trigger the bonus feature. Prizes for card symbols are low, as you might expect, but still you can win up to 150 coins on a 20 coin bet if you land five Aces. The three monsters pay much better – 250, 500 and 1000 coins respectively. With the maximum win multiplier of x5, the best prize on a single payline is therefore 5000 coins, or 100,000 coins if you'd happen to land a full board win.

The main bonus feature is triggered in an interesting way. You need to collect five stars, and you get one star every time you land 10, J, Q, K and A in that order scattered on your five reels. When you get your five stars, you will choose one of the three monsters and will then destroy the buildings in the city. As you destroy buildings, you win coins. The game ends when the monster is defeated or all buildings are destroyed.

Three Girls that land on your reels at the same time will trigger the free spins game, where you'll get 10 free spins. If a win isn't achieved once every 3 spins, a monster will come and give you a re-spin with a guaranteed win. Additional free spins can be won if you land Girl Scatters again, but stars aren't collected during the feature. The free spins feature isn't necessarily that rewarding as there's no extra feature added to it, so they're just spins that you don't pay for, the only difference being that you're guaranteed a win every three spins. Also note that this is a cascade game so 10 free spins might as well mean 20-30 effective spins if you also take re-spins into account.

The game has very good theoretical return to player (RTP) of 97.12% and that would be the main reason for playing the game for real money, as you're certain the game is paying well in the long run. Variance is medium so the game is pleasant to play, and it found a good balance between win frequency and win quality. Rage to Riches offers enough potential rewards in form of bonus features, cascades and win multipliers, so it's a good game to play. Choose a Play'n GO casino from our list of recommended online casinos, deposit some money and find this game in the lobby.