Northern Sky is an innovative Quickspin slot that makes great use of the re-spins feature in which the winning symbols are the ones that are held, and every new symbol will pay ... Read Full Review 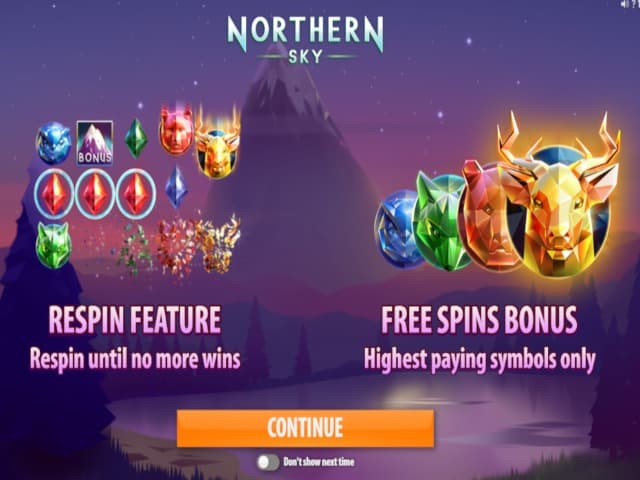 Northern Sky is an innovative Quickspin slot that makes great use of the re-spins feature in which the winning symbols are the ones that are held, and every new symbol will pay for the winning payline again. There is also a free spins game with high-win symbols only, and this is one low to medium variance game that's so much fun to play.

Northern Sky is played on a 5x3 board with 9 fixed paylines, so your only job is to choose a bet that can range from €0.20 to €100 per spin, and press the Spin button. Alternatively, you may wish to click Autoplay or Fast Play to increase the speed of the game. But the game plays fast so there's no need to. This is just a thrilling game that times itself perfectly, so it's best to play it in a normal way.

Any win will trigger the re-spin feature which goes on for as long as you keep getting a new win on the re-spin. Whenever you land a winning combination, the winning symbols will be held while the other symbols disappear and are replaced by new ones. The game will pay on every re-spin, which is crucial, as it means you'll get paid multiple times for the same winning combination. Re-spins can, in theory, get you to that full board win, too.

Also, the Scatters are collected throughout the re-spins, so even if they disappear from the board, it's enough to just have three individual Scatters appear during the same re-spins sequence, and you'll trigger the free spins game with 10 free spins. During the feature only the four Animals will be present on your reels so the chance of getting more Deer symbols will slightly increase.

The game is beautiful, with beautiful symbols and animations. The symbols will light up as they land on the reels even before a winning payline is announced at the end of the spin, so you'll know you got a win as soon as at least three symbols land on a payline. The four animal symbols – Owl, Wolf, Bear and Deer look awesome. There are also three Gem symbols, and this graphics will appeal the most to players who enjoy slots with Gems. Needless to say, the game looks great on all devices.

The Gem symbols can basically only give you your stake back, or a fraction of it, and Owl and Wolf can't do much more than that on a single winning payline either. Bear can, as the prize for five-of-a-kind is 10x, and Deer is the only high-win symbol in the game as it will pay 40x for five-of-a-kind. But these are the single payline prizes, and this game not only helps you get multiple paylines but also pays for each re-spin so actual wins you get are much better than what you'd assume from looking at the paytable. You can trust this game and play it with real money.

Northern Sky has somewhat lower variance than some other Quickspin slots that can even go to extremes, and the thing that makes this slot easier to play is the re-spins feature that pays for every re-spin individually, so you can actually land a nice 15x win even with the lowest symbol. As a result, this game is capable of keeping your balance healthy for a long time, so you can safely play it with a higher bet per spin than usual. The game is pleasant to play and not frustrating at all, as you're confident a big win will soon come and bring your balance back to positive. Go ahead and sign up with one of the top mobile casinos and play Northern Sky, it's one of the better Quickspin slots and has a solid theoretical payout of 96.57%.