Relax Gaming has launched a new slot inspired by its smashing hit Money Train 2, Money Cart Bonus Reels. The new slot is nothing like the original in terms of gameplay, though, ... Read Full Review 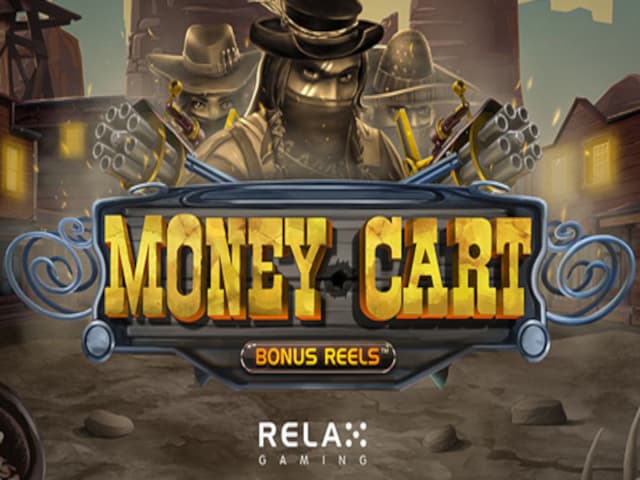 Relax Gaming has launched a new slot inspired by its smashing hit Money Train 2, Money Cart Bonus Reels. The new slot is nothing like the original in terms of gameplay, though, as there will be no Free Spins, but the entire action will revolve around Respins and Modifiers.

Initially based on a 5x4 grid, with the possibility to unlock 2 more reels after, as implied by its name, Money Cart Bonus Reels will be a really fun game to play, based on the Hold’n’Win model. You’ll be seeing nothing but tumbleweed, the purple Bonus Symbols, and the outlaw characters on the reels. Each of these has a special role, so before you load it on any device, make sure you stay with us to learn how to play the Money Cart Bonus Reels UK slot.

We need to emphasize the fact that regardless of whether you decide to play Money Cart Bonus Reels on your mobile or desktop device, the control buttons will be at the same place, below the reels. On the left, you have the Spins Left display, and on the right, the Total display. Above the reels, you have your current bet level displayed, and correspondingly the value of the purple Bonus Symbol displayed, to be explained soon.

Now, below the reels, you first see the three-bar button, going from right to left. Pressing it, you enter the paytable directly. Inside, you meet the purple Bonus Symbol and then the five other special symbols that will appear during the gameplay, which have no value on their own, as you won’t be making winning combos with them, but they will play a special role in activating the modifiers offered in the game. Other than the paytable, you will be able to locate the Dollar tab, where you can change your bet level from 0.10 to 500 credits, the Autoplay tab where you could put in play an infinite number of Autospins, the Settings tab, where you can adjust the sounds and display settings, and the Question Mark button that takes you to the game’s rules.

But, going left from the three-bar button, you also have the Autoplay button available, followed by the Spin button and the Coin Button, to adjust the bet level. Below them, you have the Balance, Win, and Bet displays.

No matter whether you’ve chosen to play Money Cart Bonus Reels real money slot on your desktop or mobile device, as mentioned, you will see that the game will play equally well on any device.

The slot, however, is specifically optimised for mobile play since its HTML5 format allows it to be compatible with any screen size. So, whether you have an Android or iOS-powered smartphone or tablet, you can rest assured that you'll get the same experience playing this amazing slot, just like you would on your desktop device.

Basically, since there’s no Wild, and you’re not really making winning combos like in regular slots, nothing much happens in the base game of Money Cart Bonus Reels slot – you go straight to the Bonus game.

In fact, as you start spinning the reels, you only see tumbleweed symbols on the reels, which are there to fill out the screen so that it does not feature empty spaces and the purple Bonus Symbols. The minute you land at least three Bonus Symbols anywhere across the grid, you trigger the bonus round.

The Money Cart Bonus Reels Bonus Round is the Respins feature. When you land at least three Bonus Symbols, you trigger it. Immediately, you see that 3 Respins are added to the Spins Left display, and on the right side of the reels, the Total of Respins is displayed. That’s because with each new Bonus Symbol you land, the Spins Left counter resets, and the new Respins are added in the Total counter.

When you read the game’s rules, you see that Relax Gaming has explicitly pointed out that the max you could win is 2,000x the stake and that the RTP is an incredible 98.00%! The slot is highly volatile, 4 out of 5, meaning it can surprise you with a massive win when you least expect it.

Considering the max bet is quite big, of 500 credits, it means that you could win 1,000,000 credits playing Money Cart Bonus Reels online slot. That’s one million credits, you guys, a payout definitely worth trying this fun game for!

The beauty in Money Cart Bonus Reels is that it is such an uncomplicated game, which contributes to the overall fun you could be having if you decided to play it. You won’t be bothered looking out for winning combos, you won’t need to be checking out the reels for symbols other than the essential ones, and you don’t need to wait for any special features to be triggered to get to the top payout of 2,000x the stake. And yet, there’s still a lot of action going on on the reels, compared to its predecessor, Money Train. Therefore, make sure you give Money Cart Bonus Reels a try at the best online slot sites because it is definitely a game worth trying. You'll love it the minute you trigger the first round of Respins, that’s for sure!

Yes, indeed. It is marked 4 out of 5 on the volatility scale, so it is a pretty volatile slot.

No, unfortunately, no. The most you could win playing it is 2,000x the stake, though, which translates to 1 million credits if you play it for the max bet of 500 credits. That’s definitely a payout similar to a jackpot prize.

No, Money Cart Bonus Reels is not a Megaways slot. This is a rather unusual slot that offers fun gameplay, but it does not offer the Megaways mechanics.

Why is Money Cart Bonus Reels so popular?

Money Cart Bonus Reels is popular because it is inspired by other releases by Relax Gaming, the original being Money Train, which was a smashing hit among online casino players.

As a matter of fact, yes. Regardless of your bet level, it is fairly easy to land at least 3 Bonus Symbols, considering you have so many grid positions filled with the tumbleweed, and you only need three Bonus Symbols on the grid to trigger the first round of Respins.

Do I always need to place the max bet to get the most out of Money Cart Bonus Reels slot?

If you want to scoop the max payout of 1 million credits, then yes. If not, you can play with any bet that you want, and you’ll still have plenty of fun and great payouts playing the Money Cart Bonus Reels slot.

Sure, if you play it in real money mode. The slot is also available in demo mode, but not for UK players due to UKGC regulations. So, as a UK player, the real money mode is your only option, therefore, you can rest assured that you will be winning real money playing the slot, as you would be placing real money bets.

What is the RTP in the slot Money Cart Bonus Reels?

How many paylines does the slot Money Cart Bonus Reels offer?