The Megalodon is an extinct species of white shark that lived 23 to 3.6 million years ago. It’s the ancient descendent of today’s white sharks, although far scarier and deadlier. Notice the ... Read Full Review 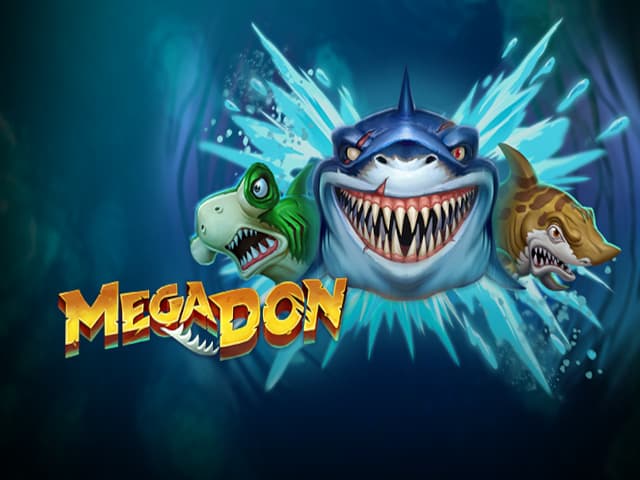 The Megalodon is an extinct species of white shark that lived 23 to 3.6 million years ago. It’s the ancient descendent of today’s white sharks, although far scarier and deadlier. Notice the word Megalo in its name? That’s because it was a PRETTY BIG shark with scientists projecting their size at up to 17 meters. The Megalodon was also the centrepiece of several bad Hollywood movies which we won’t get into.

It was certainly a real Don in the seas. Play’n GO decided to honour the extinct shark and its boss-like appearance in its slot titled Mega Don. It’s a very smart play of words, but what’s even smarter are the gameplay features and the amazing winning potential.

A medium-variance slot with an RTP of 96.2%, Mega Don comes with 1,024 ways to win. The slot can deliver Don-like wins of 10,000x the bet and is overall very entertaining. Will it compare to the best slot games in the oceans? Find out in our review below.

Mega Don has all the marks of the Play’n GO slot. It comes in a 5x3 format with 1,024 ways to win. Not surprisingly, the reels are filled with Mega sharks and mega rewards. Your goal is to lure the Mega Don and win a fortune, which is easier said than done.

The seas are ruled by the Mega Don which pays 4x for five of a kind. The other sharks are under its… fins and pay less. Play’n GO has fittingly changed the low-win symbols to smaller fish which are pretty unfortunate to be eaten in these shark-infested seas.

Play’n GO is a master of storytelling and visuals, and both are on display here. The slot looks fantastic and sounds great too. If we’re being honest, it looks more like a video game than a slot.

You can try and lure the Mega Don on any mobile device running Android or iOS. Whether it’s a table or a mobile phone, you can play the real money slot on the go with a stable Internet connection through your favourite browser.

How to Play the Mega Don Online Slot

The first thing you need to do in the Mega Don slot is chosen a bet. You can go from £0.10 to £100 per spin in small increments, so any player can find their sweet spot. The reels will turn with a fun animation when you hit the Spin button.

The base game is pretty straightforward and enhanced with the Snack Time feature which is basically upgrading symbols. Up to three symbols can be randomly selected for upgrades – whenever they land, they turn to the Don.

Unfortunately, that’s all the base game has to offer. But, a real Shark Feast awaits in the Bonus Round.

Three or more Scatters will trigger the Shark Feast feature. It comes with three tiers that depend on the number of triggering Scatters.

With the Snack Time feature also active in the Bonus Round, you can get up to six upgrading symbols. That’s your key to big wins in the Free Spins Round. Oh, and you can retrigger it if you manage to land three or more Scatters.

The Mega Don slot RTP is set to 96.2% as expected out of a Play'n GO slot. It is paired with a high variance and offers wins up to 10,000x in the Bonus Round.

The Megalodon ruled the seas millions of years ago and it’s the don in these waters too. Play’n GO is back with a visually impressive title that can deliver amazing wins. The smaller fish is always eaten by the Dons, and this is one shark feast we’re actually delighted to try.

You can try it for free or play for real money in any top online slot site right now.

The Mega Don slot was developed and published by Play’n GO. It’s one of the top studios in the industry, known for its storytelling and amazing graphics and animations. All of it is on display in Mega Don, the latest game from Play’n GO’s kitchen.

Yes, it is. Most Play’n GO slots are highly volatile, and the studio didn't take the variance a notch in this one. With the RTP set at 96.20%, these two technical factors make up for a pretty solid math model. It’s not the highest-paying slot, but it’s rewarding nonetheless.

What does the Snack Time feature do in the Mega Don slot?

The Snack Time feature is triggered randomly in the base game. With it, up to three symbols are selected for upgrades. When they land, the Don eats them and takes their place. These upgrading symbols can be pretty rewarding if you’re lucky to land them often.

Can I play the Mega Don slot for free?

Yes, you can. The slot’s demo mode is available in all Play’n GO casinos. You can play it to see how the symbol upgrades work and check the volatility yourself. Always try to spin slots for free before you splash a bit of money and go for the big prizes.

Is the Mega Don slot available on mobile devices?

Absolutely. The slot was developed on the HTML5 platform which makes it available to play via mobile browsers. You don’t need the latest Android device or iPhone to play this popular slot. The game will work nicely on any device released in the past five years.

Should I download an app to play it on the go?

No need to download anything to play Mega Don on your mobile phone. It works via mobile browsers, so you can log in to your favourite Play’n GO casino, load up the game from the lobby, and spin it to win.

Is there a free spins round in the Mega Don slot?

How to win big in the Mega Don online slot?

Winning big in the Mega Don slot is linked to the upgrading symbols. You can get up to six if you’re lucky in the Bonus Round, which can lead to stunning wins. These symbols all turn to the Mega Don, offering wins up to 10,000x the bet.

Is there a promo code for the Mega Don slot?

When was the Mega Don slot released?