Legend of the Ice Dragon Slot

Fans of the fantasy genre are in for a treat with the Legend of the Ice Dragon slot game from the team at Play’n GO. The game transports us up to the ... Read Full Review

Play Legend of the Ice Dragon for Free Now! 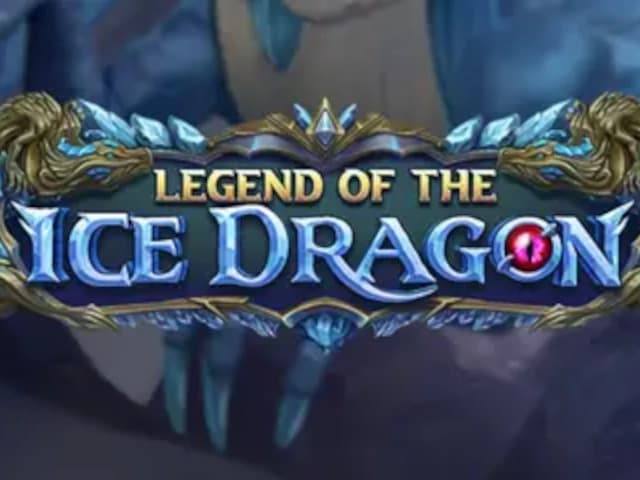 Legend of the Ice Dragon Review

As we’ve mentioned in the intro, Legend of the Ice Dragon takes us high in the sky, where a white dragon floats around, watching us spin the reels. The game has a really nice design, with the titular dragon looking particularly impressive. The theme of the game is obviously going to have people wondering whether it is just another Game of Thrones rip-off, but that is far from the case, with the game doing a great job of crafting its own world that feels unique. The animations also do a nice job of immersing you, as does the soundtrack.

How to Play the Legend of the Ice Dragon Online Slot?

One of the first things you will notice when you load up the Legend of the Ice Dragon slot game is that it uses enhanced reels. The game takes place on a 7x7 grid, which is much bigger than the average size. It is also another title from Play’n GO to use a Cluster Pay system. The slot does not have any traditional paylines, instead, paying out for clusters of symbols of five or more.

Like most online slots that use this system, the game also has a cascading wins feature. Whenever you secure a win, all winning symbols will disappear, and new ones will fall into their place.

The stake for the game is changed by clicking through the denominations at the bottom of the screen. The minimum you can wager is €0.20, while the maximum is €100, which is a good betting range that should satisfy the needs of most players.

Like all of its top online slots, Play’n GO has adapted Legend of the Ice Dragon for use on a range of different devices. The title is supported on both Android and iOS operating systems, with the quality of the game not being compromised in any way when it makes the jump to the smaller screen.

Play’n GO always does a fantastic job with bonus features, and Legend of the Ice Dragon is no exception. The game has a big selection of different features for players to take advantage of. Those who have played Wild Frames will recognise several of the features here, with the game utilising the exact same gameplay mechanics.

One of the main features is the Ice Frame. Whenever a Wild lands on the reels, the space it landed on will become frozen. If another Wild then lands in this, it will become a Multiplier. This is effectively a Progressive Multiplier feature that can lead to some big wins. Sadly, it resets after every spin, so the only way to win big with this one is with a cascade of wins.

To keep you invested in the slot, Play’n GO has also inserted some features that will trigger Winless Spins. The three features, the Hailstorm, Avalanche, and the Blizzard. The Hailstorm rewards players with a cascade and also turns random symbols into Wild. The Avalanche also adds more Wilds to the reels, but instead of a cascade, it will remove two low-paying symbols. Finally, the Blizzard will turn between two-five symbols into Wilds and destroy all the other symbols on the reels, starting a cascade.

You will also notice a metre on the right-hand side of the reels that is powered by Cascading Wins. This will trigger one of four Ice Crystal features if you can manage to land a cascade of 20 wins or more. The Tail Lash is rewarded for 20 wins, and it turns all of the high-paying symbols into one symbol. The Ice Scorch follows this when you hit 40 wins, and it transforms a number of symbols into wilds.

The Destruction feature is where things start to get really exciting, as it wipes all out low-paying symbols on the reels. Finally, the Dragon Blast will turn all symbols into Wilds and hit the grid with the highest Multiplier of 8x. These are rewarded for 60 wins and 80 wins respectively. Needless to say, when playing for real money with the biggest welcome bonus, you can secure some big wins.

The Legend of the Ice Dragon RTP is listed by Play’n GO as a solid 96.29%, which is just slightly above the industry average. It has been given a rating of 8 out of 10 for volatility, which is high. The maximum that can be won in the slot is a solid 6,000x your stake.

Play’n GO has done a really good job with this title. If you were a fan of Wild Frames, then you are going to be getting more of the same from Legend of the Ice Dragon, just with a different theme. This is not a bad thing though, with the game coming loaded with special features and some really nice visuals. The paying bonus features are a great way of helping you stick around, and the rest of the features and gameplay complement each other really nicely. This is definitely a slot worth checking out at the top online casinos.

Who developed the Legend of the Ice Dragon online slot game?

Legend of the Ice Dragon was developed by Play’n GO. Play’n GO is one of the most respected developers in the industry.

What is the maximum I can win in the Legend of the Ice Dragon online slot game?

What is the volatility of the Legend of the Ice Dragon slot?

The Legend of the Ice Dragon slot game is rated as being 8/10 for volatility, giving it a high ranking.

What devices can I use to play the Legend of the Ice Dragon slot?

The slot has been designed to work on a range of different platforms and devices, this includes phones and tablets.

How many paylines are there in the Legend of the Ice Dragon slot?

The slot does not have traditional paylines, instead, it uses a Cluster Pay system. Payouts come from landing clusters of five or more symbols.

Are there are Free spins in the Legend of the Ice Dragon slot?

No. Despite having a big selection of features, there is no Free Spins Round available in the slot.

What other games are similar to the Legend of the Ice Dragon slot?

The most obvious comparison is the Play’n GO slot Wild Frames. This uses the same gameplay mechanics and special features.

What is the least I can wager on one spin in the Legend of the Ice Dragon slot?

Where is the best place to play the Legend of the Ice Dragon lot?

You can play the Legend of the Ice Dragon slot for real money at a range of top online casinos. You can find a casino that suits your needs by reading our in-depth casino reviews elsewhere on the site.

Can I play the Legend of the Ice Dragon slot for free?

Whether you can play the slot for free depends on your location. You will be able to play for free in many countries. Sadly, those in the UK cannot play for free.