Few movie franchises are as successful as Jurassic Park. The original movie smashed box office records back in 1993 and it has since spawned four sequels and various spin-offs across different mediums. ... Read Full Review 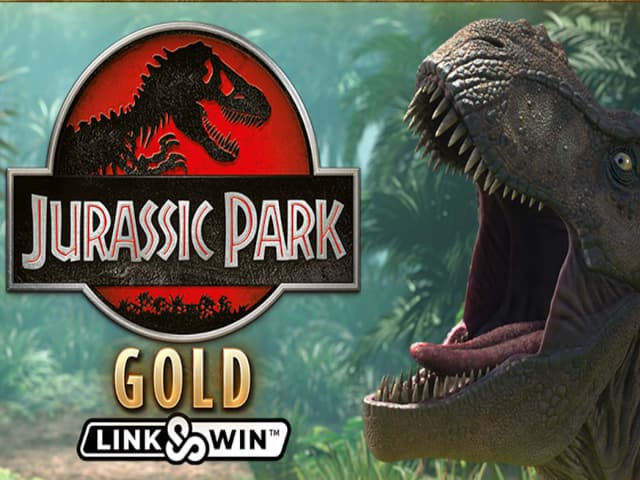 Few movie franchises are as successful as Jurassic Park. The original movie smashed box office records back in 1993 and it has since spawned four sequels and various spin-offs across different mediums. Slot games are one such medium, with many developers putting different spins on the series throughout the years. Microgaming has partnered up with Stormcraft Studios to provide a new take on the franchise with Jurassic Park: Gold. The title uses a Link & Win feature and also boasts some great jackpot payouts. Let’s break all of this down and more in this Jurassic Park: Gold slot review.

Find the best new slots in our Slot Calendar which is updated regularly.

Jurassic Park: Gold sticks closely to what fans of the Jurassic Park franchise would expect. The title takes place deep inside the jungle, with the symbols being made up of dinosaurs and characters from the original movie. It’s nothing groundbreaking, but it provides a dose of nostalgia and will no doubt please fans of the series.

The main screen is a little busy, with the four jackpots being displayed on the side of the screen as well as the counters for both the Wildstorm and Link & Win features.

As the movies have documented, making a trip to Jurassic Park is never a fun experience. Thankfully, the opposite is the case with the Jurassic Park online slot game. The title is easy to play and has some budget-friendly staking options.

The action takes place across five reels and three rows, which is what you would expect to find in most top online slot games UK. The game can be played for as low as £0.20 up to £30, making it perfect for those with lower budgets.

The Jurassic Park: Gold mobile slot game has been adapted to work on mobile devices. The game’s simple design makes an effortless switch to smaller screens, with the game offering all of the same gameplay features and bonuses. It runs well on both Android and iOS operating systems.

As you will see at the side of the reels, there are several slot bonus features that can be activated in the Jurassic Park: Gold slot game. Firstly, there is the Link & Win feature, which is marketed as one of the slot’s big selling points.

This is effectively a Re-spin bonus, with six “power balls” needing to land on each of the reels to trigger the game. Once this happens, they will hold in place and a Re-spin will be triggered. Players will get three Re-spins. Any more power balls that add to the reels on these spins will stick and they will also reset the spins to three. There are also additional rows that will be unlocked once you hit a certain number of power balls, with a maximum of eight being available.

First, there are the Dilophosaurus, Velociraptor, and Spinosaurus spins. These offer 12, 9, and 6 spins, with Wild Multipliers of 2x, 5x, and 8x respectively. Finally, there is the Tyrannosaurus Rex Free Spin. In this round, there is one spin but there is the chance of all five reels being Wild.

During the non-T-Rex Free Spins Rounds, there is also a Wild Chase feature. If a Wild lands, it highlights a position on the reels. If another Wild lands here, then it will expand to fill that reel.

The Jurassic Park: Gold slot has steady numbers across the board. It has an RTP of 96%, which is around the industry average. It is considered highly volatile and offers a maximum payout of 8,000x your total stake. This is won as the Mega jackpot in the game.

Jurassic Park movie franchise has inspired a series of solid if fairly unmemorable online slot games, and Jurassic Park: Gold is going to fall into that category as well. The title has a selection of enjoyable bonus features and a nice jackpot system, but it does nothing particularly original in terms of gameplay or design. Fans of the series will be happy to see the dinosaurs back on the reels again though, and there are certainly a lot worse movie adaptations out there.

Try the Jurassic Park: Gold slot yourself at the best online slot sites!

Jurassic Park: Gold was developed by Stormcraft Studios and released by Microgaming as part of its Partners program.

Is there a jackpot in the Jurassic Park: Gold online slot game?

Yes! There are four jackpots in the game that can be all be won in the Link & Win Bonus round. The biggest is worth 8,000x your total stake.

How often will I win in the Jurassic Park: Gold slot game?

The game is considered highly volatile, so players should expect plenty of dead spins if they want to score big wins.

The Link & Win Bonus is a popular mechanic that uses power ball systems with cash prizes to trigger a Re-spin Round.

Where can I play the Jurassic Park: Gold slot game?

The title can be played at a range of top online casinos. You can find one that suits your needs by checking out our detailed casino reviews elsewhere.

What is the RTP in the Jurassic Park: Gold slot?

The RTP for Jurassic Park: Gold slot is 96%, putting it around the industry average.

Can I play the Jurassic Park: Gold slot for free?

Yes! Though, this will depend on your location. Sadly, players in the UK will not be able to play Jurassic Park: Gold for free.

Is Jurassic Park: Gold a sequel?

No, but the game is based around the hugely popular Jurassic Park franchise. Several slot games including Jurassic Park and Jurassic Park: Raptor Riches, are also based on the series.

Are there free spins in Jurassic Park: Gold?

Yes! The game offers a Free Spins Round which is triggered by landing three or more Scatter symbols.

How much can I bet in the Jurassic Park: Gold slot?