The YGS Masters program has produced some fantastic slots in the last few years, including such titles like Ancient Eclipse or Brawl at the Redcap Inn, and the latest entry is Hunters ... Read Full Review 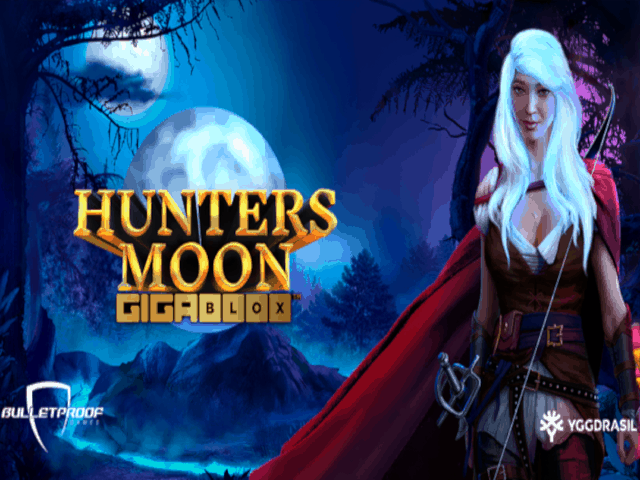 The YGS Masters program has produced some fantastic slots in the last few years, including such titles like Ancient Eclipse or Brawl at the Redcap Inn, and the latest entry is Hunters Moon Gigablox from the team at Bulletproof Games. As the name might suggest, the title utilises the Gigablox theme, which has become a popular hit for Yggdrasil lately. The slot takes place in a fantasy world, with the main character, the Hunter, feeling a little like a female version of The Witcher. It’s a great theme with a really nice design, but is the slot any more than a pretty face? Let’s take a more detailed look into this Hunters Moon Gigablox slot review and find out.

Yggdrasil and Bulletproof Games deserve a lot of credit for the design of this slot. The graphics here are top-notch, with the titular Hunter looking as though she could have been taken straight from a video game. Everything about the slot works on a visual level, with the symbols all looking superb and a lot of the animations being seamless.

How to Play the Hunters Moon Gigablox Online Slot?

When you load up Hunters Moon Gigablox, the first thing you are going to notice is the titular Gigablox mechanic. Gigablox is a mechanic owned by Yggdrasil that sees enhanced symbols land on the reels, these are typically 2x2, but they can be as big as 6x6. Whenever you land one of these as a winning combination, they will break down into 1x1 versions of the symbol, so a 2x2 Gigablox Wild is actually 4 Wild symbols. This is a really useful mechanic that enhances gameplay and can increase winnings.

The slot itself takes place on a 6x6 grid, with an additional row above the reels that we will come to later. There are 50 fixed paylines on every spin. The minimum stake here is £0.50, while the maximum is £100. This is not going to appeal to those on smaller budgets, with plenty of slots offering lower minimums and bigger potential payouts. Of course, there is also an auto spin option in the game if you want to put your feet up and let the Hunter do the hard work.

Like most top online slots, you can take the Hunters Moon Gigablox online slot game for a spin on a range of different devices. The game has been optimised to run on mobiles and tablets and is supported on both Android and iOS operating systems. Thankfully, it still manages to maintain its visual flair and its enhanced gameplay mechanics when making the transition to the smaller screen playing at our recommended mobile casinos.

The titular Gigablox mechanic is not the only thing that makes this title stand out. The slot also comes with a couple of handy bonus features to help players secure some wins. One of the first things you will notice in the game is the extra row at the top of the reels. This is partially covered, with the two end spaces only being partially visible.

All Wild and Bonus symbols will appear on this row, and when they do, they can then randomly be added to the reels themselves. Of course, if it lands above a Gigablox, this can be particularly useful and lead to some generous payouts when playing the Hunters Moon Gigablox slot for real money.

The most lucrative bonus in the game comes by way of the Free Spins Round. This is triggered when you land five or more of the Bonus symbols on your reels. The number of free spins will be the number of Bonus symbols that you land. During the round, the game promises an increased frequency for Wilds and Bonus symbols.

Claim the best slot bonus and enjoy all of the special features the Hunters Moon Gigablox slot can offer now!

The maximum winnings you can secure in the Hunters Moon Gigablox slot game is 3,909x your stake. This is a good amount, but it is not going to set the world on fire. The slot has an RTP of 96%, which is the industry average, and it is rated as being medium-highly volatile.

There is no denying that Hunters Moon Gigablox is a beautifully designed slot, and the Gigablox mechanic definitely helps it to stand out. Where the slot falls short, is the combination of higher stakes and a fairly average maximum payout. This is likely to turn some players away from the game, which is unfortunate because it is well-designed, and the gameplay mechanics are really nice. If you want a stylish slot experience at our top online casinos, then this will tick a lot of boxes; if you want good value for money, though, then this may not appeal.

The slot was developed by the team at Bulletproof Games and was released by Yggdrasil as part of the YGS Masters program.

Can I play the Hunters Moon Gigablox slot game for free?

This will depend on your location. Sadly, players based in the UK will not be able to play the slot for free due to government legislation.

How many ways to win are there in the Hunters Moon Gigablox slot?

There are 50 paylines active on every spin in Hunters Moon Gigablox.

Can I buy a Bonus in the Hunters Moon Gigablox slot?

Yes! The slot comes with a Buy Bonus feature that allows you to skip the queue and get straight to the bonus round.

What bonuses are there in the Hunters Moon Gigablox slot?

The main bonus in the Hunters Moon Gigablox slot is the Free Spins Round. As well as this, there is an additional row above the reels that drops Wilds and Bonus symbols.

Is there a Hunters Moon Gigablox jackpot?

No. Unfortunately, there is no jackpot, fixed or progressive, available in this slot.

How many free spins can I get in Hunters Moon Gigablox?

The number of free spins you win in this slot is determined by the number of Scatter symbols you land in order to trigger the round. That means there is a minimum of five and a maximum of 36.

How volatile is the Hunters Moon Gigablox slot?

Hunters Moon Gigablox is rated as medium-high by volatility by Yggdrasil.

Gigablox is a gameplay mechanic that sees mega symbols drop onto the reels. These can be between 2x2 in size all the way up to 6x6, taking up the entire grid.

What is the minimum I can bet in the Hunters Moon Gigablox slot game?

The lowest amount you can wager in the slot is £0.50, and the maximum is £100. The minimum deposit is higher than average, which may deter some players.