The Golden Fish Tank slot game from Yggdrasil was a quiet success for the company. As a result, it has returned to the world for the sequel, Golden Fish Tank 2 Gigablox. ... Read Full Review 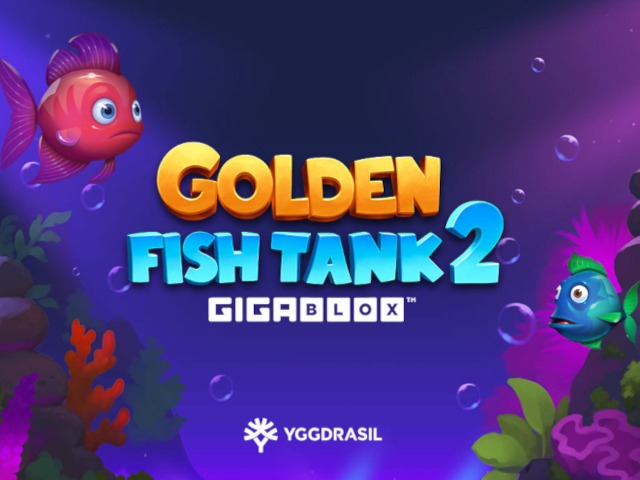 The Golden Fish Tank slot game from Yggdrasil was a quiet success for the company. As a result, it has returned to the world for the sequel, Golden Fish Tank 2 Gigablox. As you can see from the title, the sequel is also utilising Yggdrasil’s Gigablox mechanic. While the mechanic has not caught on in the way that the company would have hoped, it has had some strong hits and can enhance the gameplay when used right. Does this slot manage to get things right? Let’s take a more detailed look into this Golden Fish Tank 2 Gigablox slot review.

While the design for Golden Fish Tank 2 might look very basic, it is difficult not to fall in love with the design of the fish and the bright colours. The game feels like it has been taken straight from a Pixar movie, with the characters having loveable, and in some cases rather goofy, expressions. It really adds some life to proceedings and makes the game feel fun.

There are also some charming animations that take place whenever you secure big wins or move into the bonus rounds, with several of the game’s inhabitants coming to life to provide you with rewards. It might not score high when it comes to quality, but there’s no denying that it’s got a lot of heart.

How to Play the Golden Fish Tank 2 Gigablox Online Slot?

Those who played the original Golden Fish Tank slot game will find plenty of similarities between this game and the original. The action takes place on a 6x4 grid with 25 paylines, which is a slight increase from the 20 in the original.

The minimum bet you can place is £0.01 per line, with all 25 lines having to be active. This means that the minimum you can wager is £0.25. The maximum value per line is £4.00, which comes to £100 across all 25 lines. There is a Golden Bet feature available in the game. This will increase the number of bonuses you get in the free spins round. If you want to activate this, then you will have to wager your line bet 30x, so the minimum is £0.30, and the maximum is £120.

Of course, the biggest difference between this title and its predecessor is the Gigablox mechanic. This is a system designed by Yggdrasil that sees super-sized symbols land on the reels. These can take a 2x2 stake all the way up to a 4x4. The big blocks count as individual symbols in winning combinations, which can be hugely beneficial when you are playing the slot for real money.

As you would expect from a slot developed by Yggdrasil, Golden Fish Tank 2 Gigablox has been perfectly optimised to work on a selection of different devices and platforms. The game is supported on both mobiles and tablets, and it still manages to maintain all of its visual charm and great bonus features when it makes the transition to the smaller screen. With most top online casinos offering Yggdrasil titles, you shouldn’t struggle to find somewhere to play this game.

Yggdrasil has built on the original game by adding some really good bonus features. The Free Spins Round from the original slot is still here, but some changes have been made. In order to trigger the round, you will need to land five or more Scatter symbols. Each Scatter symbol you land will reward you with one free spin. Remember that the Gigablox symbols will break into separate symbols, so a 3x3 Gigablox will give you nine symbols.

When the Free Spins Round starts, you will be randomly rewarded between 3-7 bonus features. You can choose to gamble the number of free spins and bonuses you have at the start, though this can backfire, so approach with caution.

You will then be rewarded a combination of features. The wild fish transforms a fish symbol into a Wild, the 2x Multiplier does as it says on the tin, the extra Wild adds more Wilds to the reels, the fish stack adds Stacked symbols, and there is also an extra Free Spins feature. Perhaps the most useful you can secure is the Expanded Reels bonus, which expands the grid out to be 6x6, and ups the paylines from 25 to 40.

These bonus features and free spins complement each other nicely, and they also work really well in tandem with the Gigablox mechanic.

The Golden Fish Tank 2 Gigablox RTP is listed as an average 96%, with the volatility being rated as medium-high. The maximum win is only 5,000x your stake, which may not be a huge amount but is still a solid offering.

It’s hard not to have a good time while playing Golden Fish Tank 2 Gigablox. The slot has a really charming design and is super-relaxing and easy to play. The Gigablox feature, which has been a bit of a mixed bag so far, works really here, and it complements the gameplay nicely. The bonus features are also nice, and players feel as though they have plenty of control over the way that the game is being played. This is definitely a slot worth playing at the best online casinos.

Golden Fish Tank 2 Gigablox was developed by the team at Yggdrasil. Yggdrasil is one of the most respected names in the industry.

Gigablox is a gameplay mechanic developed by Yggdrasil that features square-sized enhanced symbols on the reels.

What is the RTP of Golden Fish Tank 2 Gigablox?

The theoretical return to player for Golden Fish Tank 2 Gigablox is listed as 96%.

Can I play the Golden Fish Tank 2 Gigablox slot for free?

Yes, though, this will depend on your location. Sadly, players based in the UK will not be able to play Golden Fish Tank 2 Gigablox for free.

What is the most I can win when playing the Golden Fish Tank 2 Gigablox slot?

The biggest amount you can win when playing Golden Fish Tank 2 Gigablox is 5,000x your stake.

Is the Golden Fish Tank 2 Gigablox slot a sequel?

Yes! The slot is the follow-up to the popular Golden Fish Tank game that was also developed by Yggdrasil.

Are there any free spins in the Golden Fish Tank 2 Gigablox slot?

Is the Golden Fish Tank 2 Gigablox slot safe and fair?

Yes. Yggdrasil has a very strong reputation within the industry, and all of its titles are tested for fairness by third parties.

Where can I play the Golden Fish Tank 2 Gigablox slot online?

There are so many casinos where you will be able to play Golden Fish Tank 2 Gigablox. To find one to suit your needs, check out our detailed casino reviews elsewhere on the site.

What devices can I use to play the Golden Fish Tank 2 Gigablox slot?

The game has been perfectly optimised to work on a selection of devices. This includes phones and tablets. It will run on various operating systems, including Android and iOS.