Game of Thrones slot by Microgaming is the officially licenced game so you can play a quality slot game and enjoy the critically acclaimed HBO series at the same time. Microgaming released ... Read Full Review 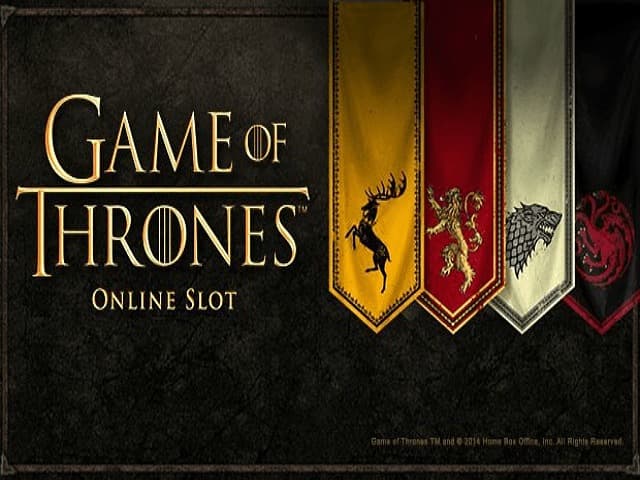 Game of Thrones slot by Microgaming is the officially licenced game so you can play a quality slot game and enjoy the critically acclaimed HBO series at the same time. Microgaming released two versions of the game, with 15 paylines and with 243 ways to win, and the paytables are different but the free spins feature is the same – and you can choose between 4 different free spins versions!

There are two versions of this game, the one with 15 fixed paylines and the one with 243 ways to win. The 15 payline version is superior as it has better theoretical return to player (RTP), 96.40% versus 94.86% for the 243 ways to win version, which is a huge difference. So pay attention to which version are you playing. You set up your bet per spin easily, by choosing the cash value. Minimum bet is £0.15 for the 15 payline game and £0.30 for the 243 ways to win game. After you choose your bet, simply click Spin or Autoplay. The paytable shows cash values and not coins, and it changes as you change your bet, so it's easy to read.

In Game of Thrones slot you can choose between four different free spins game, and can make the choice already the first time when you trigger the feature. All the free spins games are actually the same when it comes to value, it's just that the variance is different. If you choose a lower number of free spins, the variance will be greater but the best possible win will also be bigger since the multiplier is x5. You can get 8, 10, 14 or 18 free spins with a x5, x4, x3 or x2 win multiplier. It seems the middle two options, Lannister and Stark free spins, are the best choice while Baratheon and Targaryen are a bit extreme. With 18 Targaryen free spins you won't earn enough money since the multiplier is only x2, and the 8 Baratheon free spins are just too small of a window to profit from that x5 multiplier.

The game doesn't really offer any character from the Game of Thrones, you only see the four house banners, and the only time you'll get to enjoy something visually appealing is in the Gamble Trail feature. Of course, gambling wins is a bad choice, but you should give it a go with small wins as you'll get to flip the Valar Morghulis coin and progress through four parts of the map with four cutscenes from the TV series, ending with the Dragon.

The paytable is decent and it has eight symbols, four of which are house symbols while four are card symbols. Prizes for five-of-a-kind range from 4x your bet to 40x your bet in the 15 payline version of the game, while the 243 ways to win game is much different as the paytable peaks at 8x your bet. You'll be winning more often in the 243 ways to win game, but the 15 payline version is very much superior, in every way, it's simply a better game. Wild and Scatter are paying symbols in both versions, and are the two best-paying symbols in the paytable.

In essence this is a very simple slot game that lets you choose your own variance in the free spins feature, and other than that it's a bare bones experience on a 5x3 board. The 15 payline version offers a much better base game with a better theoretical payout, which matters a lot since the game has only one bonus feature. It's a shame that there aren't more characters and exciting stuff in the game, but it's still nice to have an officialy licenced slot.The 15 payline version is a good slot game even for those players who aren't fans of the TV series as it offers a good paytable, excellent payout and the chance to choose your own variance. The 243 ways to win version is for those players who believe more paylines and a better win frequency equals a better game, which couldn't be further from the truth in this particular case. Pick a top online slots site from our list and start playing either on desktop or mobile!