Ready for another Norse mythology slot? Defenders of Asgard is the latest in a long line of Viking slots, this time released by High 5 Games. It comes with 10 betways and ... Read Full Review 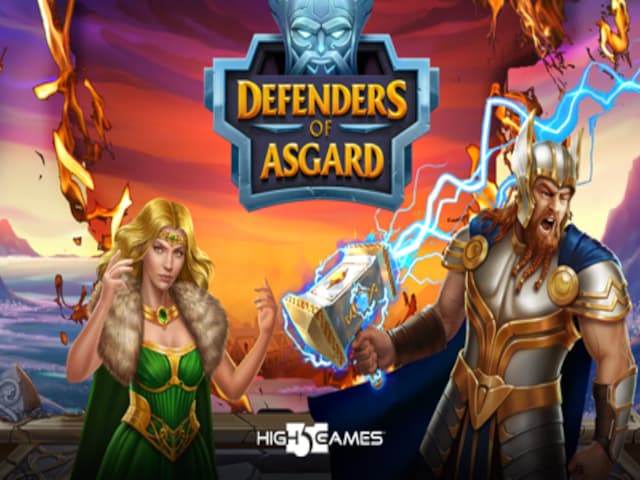 Ready for another Norse mythology slot? Defenders of Asgard is the latest in a long line of Viking slots, this time released by High 5 Games. It comes with 10 betways and an RTP of 96% paired with high variance. The slot stars Thor in the main role with appearances from Odin and other prominent gods living on Asgard.

Their mission is to protect precious Asgard from invaders, and they won’t stop at anything to do that. The Defenders of Asgard slot has a Wild with two roles and a Bonus Game triggered by three Scatters. It’s a mix of old-school and modern slot gameplay that can deliver wins up to 4,423 times your bet.

Of course, it looks as sharp as it gets, just like the majority of High 5 Games slots. Available for free and real money in any High 5 Games casino, Defenders of Asgard is a Norse slot you don’t want to miss at the best online casinos.

All High 5 Games share a common layout and rely mostly on symbol pays for the biggest wins. Defenders of Asgard indeed looks familiar, yet it strays from the math model by offering a few unique features. In terms of layout, it’s a 5x4 slot with 20 symbols, showing Odin, Thor, and Freya in all their glory. These premiums pay up to 250x for five of a kind, while the stylised card royals pay significantly less.

The absolute highest-paying symbol is one of the Wilds which shows Asgard’s unique transportation system. Getting five of these feels like hitting the jackpot, delivering wins of 2,000x the bet. This is where the duality of the Wild lies – it plays its usual role while also paying in the Scatter Bucks feature. You can differentiate the two versions of the Wild by the glowing crystal.

The Defenders of Asgard mobile slot was produced on the HTML5 platform. It is available across all mobile devices on Android and iOS, be it a smartphone or a tablet.

How to Play the Defenders of Asgard Online Slot

The Defenders of Asgard slot is simple to play. To start, you’ll need to place a bet first. You can choose from £0.20 to £200 per spin, typical for a High 5 Games slot. As mentioned earlier, the variance is high, so you should keep an eye on your bets.

The main action in the base game revolves around the two Wilds. If you land one or more with the glowing crystal, they play their usual role. It substitutes for both the other Wild and Surtr’s Scatter, while the other Wild replaces the Bonus Symbol only. \

Wins in the base game can go as high as 2,000x the bet if you land five Wilds. Unfortunately, that’s the sole feature at this point of the slot, with better action to follow in the Bonus Round.

The Scatter Bucks feature comes into play at this point. Every non-glowing crystal Wild lands on the reels with a random value. It offers 2,500 credits on reel one, and 1,000 on the other four. These are instant cash prizes that will be paid out right away as long as you’re lucky to land the Scatters.

Other than that, the action is pretty familiar. Wilds still pay up to 2,000x the bet, and the base game symbol payouts have been retained as well.

The RTP of the Defenders of Asgard slot is set at a flat 96%. It’s the average for highly volatile slots. With the right combination of Scatters and Wilds, the slot can pay a maximum of 4,423x the bet.

Defenders of Asgard is a solid slot that follows High 5 Games’ formula. It doesn’t reinvent the wheel and has no major features, but it’s fun enough to pay rewards up to 2,000x the bet for five Wilds.

The Scatter Bucks feature is a nice addition to what might otherwise be a stale Bonus Round. Give the real money slot a try if you’re into Norse mythology and we’re sure you’ll find it exciting.

Who developed the Defenders of Asgard slot?

The Defenders of Asgard slot was produced and released by High 5 Games. The studio has released plenty of hits lately and is known for its slots that follow an established formula.

What’s the lowest bet I can place on the Defenders of Asgard online slot?

The lowest bet you can place on this slot is £0.20 per spin. That’s low enough for new players and those who like to play with a bit of strategy.

Can I play the Defenders of Asgard slot for free?

Yes, you can, but not if you’re from the UK. Due to current regulations, slot demos are prohibited online in the United Kingdom.

What symbols grace the reels of the Defenders of Asgard slot?

As a Norse-themed slot game, Defenders of Asgard features Thor, Odin, Freya, and their nemesis Surtr. The Wild shows the Asgard gate, and there are low-win card royals too ‘dressed’ as runes.

Is there a Free Spins Round in Defenders of Asgard?

Can I play the Defenders of Asgard slot on my phone?

Absolutely. The slot was designed on the HTML5 platform, making it available via mobile browsers on Android and iOS devices.

Should I download an app or any software to spin it on the go?

No need to install anything – just open your favourite High 5 Games casino from your phone and enjoy.

How to win big in the Defenders of Asgard slot?

Winning big is possible with five wilds which pay 2,000x the bet in the base game and Bonus Round. The other major win is via the Scatter Bucks feature by landing a Wild with a 2,500 value on the first reel.

Which slots are similar to Defenders of Asgard?

Thunderstruck I and II instantly spring to mind as Defenders of Asgard’s relatives. You can also try Vikings Go Berzerk by Yggdrasil Gaming if you’re looking for a light-hearted take on Norse mythology.

When was the Defenders of Asgard slot released?

The Defenders of Asgard slot was released on February 24, 2022.