Da Vinci Diamonds is a true classic slot by IGT, but it has a twist – it uses Tumbling Reels, and this means you can get many winning paylines on one spin, ... Read Full Review 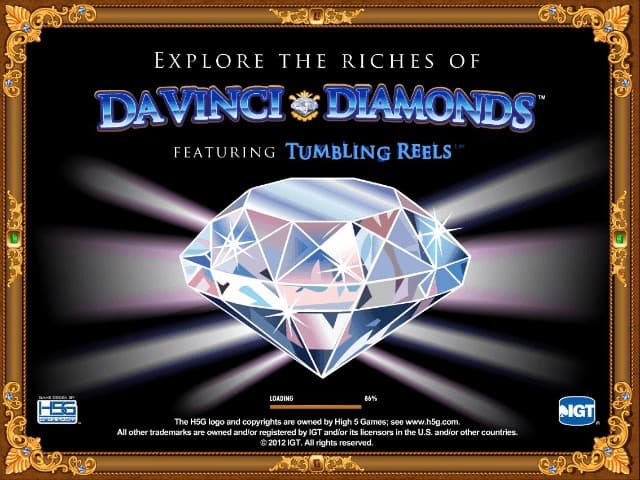 Da Vinci Diamonds is a true classic slot by IGT, but it has a twist – it uses Tumbling Reels, and this means you can get many winning paylines on one spin, and that one spin can even bring you entry to the excellent free spins game. This game was released in 2012 but it's still an excellent choice to play today.

The game is very simple to set up, as the 20 paylines on a 5x3 board are fixed so the only choice you need to make is how much will your line bet be. It can be from £0.01 to £30, so bet per spin can range between £0.20 and £600. When you're done choosing your bet, simply click the large Spin button at the centre of the console, or alternatively use the Autoplay button on far right, though this wouldn't speed the game up considerably since the cascades are slow.

We mentioned cascades in the previous paragraph, and this isn't something you see often in classic slots. Da Vinci Diamonds might even be a unique case, as it's a classic slot in which winning symbols disappear in order to be replaced by new ones that fall from above, which essentially gives you a re-spin after every win. And some of those re-spins can bring along huge wins as the winning symbols move out of the way to make room for new combinations or for another Scatter. Many falling blocks games don't really give you something to look forward to, but this one does, the cascades can go on for a while and can produce some huge wins, you don't get the feeling that the game is intentionally withholding wins during the cascade as you do with many other slots.

This is especially true during the free spins, as although you only get 6 free spins to begin with, the feature is played with totally different reel strips. The three Painting symbols pay Scattered and their prizes are significantly reduced, and there are four Gems instead of three. You always start with 6 free spins when you land three Bonus symbols on a payline on first three reels, but you can get many more spins. When you land three Bonus symbols you'll get 2, 3 or 4 extra spins, and with four Bonus symbols you'll get 4, 6, 8 or 10 extra spins. Should you happen to land all five Bonus symbols, you can hope to land up to 15 extra free spins, and 6 as the very minimum. Bonus symbols appear on all reels during the free spins game, while during the base game they're restricted to the first three reels.

Da Vinci Diamonds is the best symbol in the game as it will pay 5,000 coins for five-of-a-kind, which is whopping 250x your total bet. The three Paintings pay between 300 and 1000 coins, though during the free spins game this is reduced to 20-30 coins because the symbols pay scattered. The Gems don't look like much, with their 100-coin prizes for five-of-a-kind and 10-coin prizes for three-of-a-kind, but these wins add up as the cascades progress, and most importantly, by removing these low-win symbols from the board you're more likely to land a big win in the next cascade, which happens quite often.

Even though this game has a theoretical payout under 95%, or 94.94% to be precise, it's still a quality slot game that can make you money – perhaps it's even much easier to win on Da Vinci Diamonds than it is on most other slots in the genre. This is because the game is set up to help you win, and to throw those big wins at you, especially during the free spins game when things change for the better. This is a quality game, particularly when played for real money, so go ahead and find check it out at one of the best online casinos. This is likely one of the better classic slots out there.