Cleopatra by IGT is one of the legendary slots, and it was released back in early 2012. This classic slot started the whole genre and became a synonym for Egyptian-themed slots. In ... Read Full Review 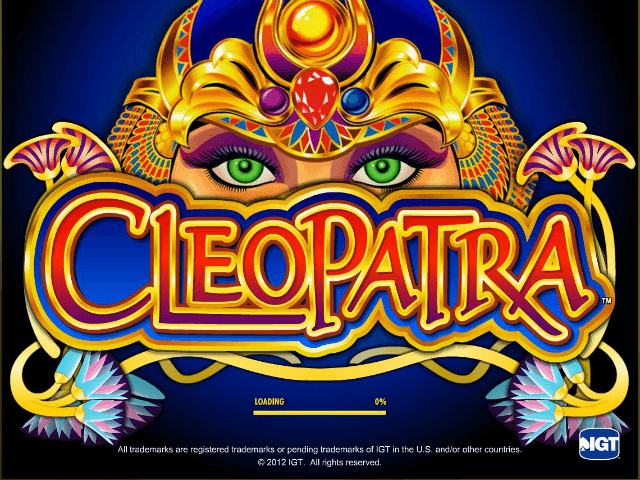 Cleopatra by IGT is one of the legendary slots, and it was released back in early 2012. This classic slot started the whole genre and became a synonym for Egyptian-themed slots. In essence this is a simple classic slot with a Wild that doubles all wins, a free spins game that triples all wins, and a Wild symbol that pays 10,000 coins if you land all five.

Cleopatra is played on a 5x3 board with 20 paylines, but you may choose to play 1, 5, 9 or 15 paylines as well, and by reducing the number of paylines you're increasing variance. Bet per payline can be from 1 to 500 coins, for a total of between 20 and 10,000 coins or, in cash, £0.20 to £100. The slot game has a very good range of possible bets, which allows for different betting strategies. This is all very simple to set up, especially in the modern version which has mobile-optimized buttons. When you're happy with your bet simply click the Spin button on the right.

Cleopatra has a lot of symbols, eleven normal ones plus the special symbols. There are six card symbols and they usually pay 5 coins for three-of-a-kind, which isn't much, and the four-of-a-kind win will only give you your stake back as it pays 25 coins. The five-of-a-kind win pays 100 or 125 coins, which again isn't much. It gets progressively better with the five high-win symbols that pay from 250 to 750 coins for five-of-a-kind, so the maximum win on a single payline with a 20 coin bet is 750 coins or 37.5x your total bet.

Cleopatra symbol is the Wild and it doubles all wins it helps create, so the paytable has a maximum single payline prize of 1500 coins or 75x your bet, and even if more than one Cleopatra is involved in your winning payline, the prize is still only doubled as Cleopatras don't multiply each other.

During the free spins game, all prizes are tripled, and it's a reasonable expectation to win at least 1000 coins during the feature, perhaps more. The tripling of all prizes is the only additional feature during the free spins, and other than that it's the same as the base game – a high variance experience in which you'll have a chance to win big. The free spins are triggered by landing three or more Sphynx Scatters, and if you land four or five you'll get an additional cash prize of 20x or 100x your total bet respectively. The feature can be re-triggered if you land the Scatters again.

Cleopatra Wild is the most powerful symbol in the game as it not only doubles wins, but it's by far the best-paying symbol in the game. If you land all five Wilds, you'll get 10,000 coins or 500x your bet, and that's the best thing that can happen in the game. This prize can't be doubled or tripled, it is what it is. With a minimum cash bet of £0.20 for 20 paylines, the prize for five Wilds would be £100, so it would actually pay off to play with a larger bet, since this game offers a chance to win big. With a max bet of £100 per spin, the prize for five Wilds would be £50,000. Do play this game for real money, and bear in mind you can get a big win anytime.

Cleopatra is popular for a reason, it's a quality classic slot with a solid theoretical payout of 95.02%. There's also the high variance, the paytable that has some nice prizes, and the low win rate which makes it tough to play this game – but only until you land a big win. This slot game can pay big if you're lucky, and the five Wilds are the reason to play. You'll find this slots in many online casinos. Check out the online slots sites we listed as the best ones that feature IGT slots including this one, make your deposit and play Cleopatra for real!