If you’ve ever wanted to build an empire but despise the ransacking and killing of entire nations, you can do it virtually in Build Your Empire, a new slot from High 5 ... Read Full Review 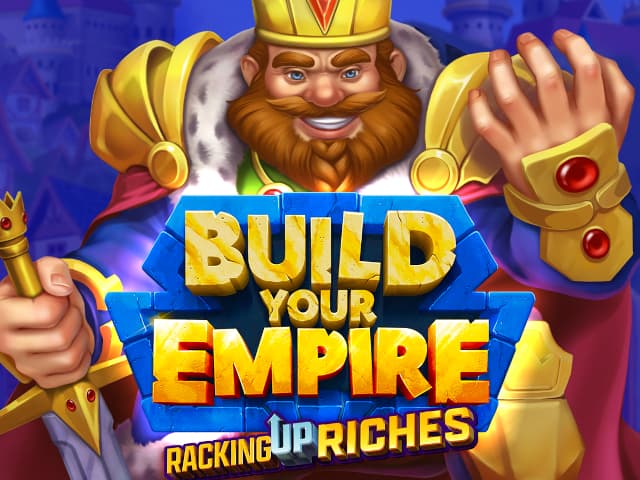 If you’ve ever wanted to build an empire but despise the ransacking and killing of entire nations, you can do it virtually in Build Your Empire, a new slot from High 5 Games. In this medieval slot game with the Cluster Pays engine, you’ll literally be building your empire from scratch with rock, wood, and a blazing forge.

The slot will allow you to rack up riches with 4 or more matching symbols in a cluster. Build Your Empire gives players a chance to build their own empire and sit on the throne, ruling over their new settlers. You can land up to 48 symbols in a cluster for mega payouts that will certainly appeal to all kinds of players.

Play the Build Your Empire slot for free or real money at the newest slot sites UK and enjoy the medieval spell in a kingdom far away.

The slot has a 7x7 grid like all Cluster Pays games. One glance at it, and you’ll certainly notice that it’s set in a medieval kingdom. The reels are flanked by massive slabs of stone, with a view of a castle in the background. The audio is on-point for a slot of its kind, so when it comes to the look and feel, High 5 Games has got everything right.

On the reels, you’ll find rare gems, wood, fireballs, a blazing forge, and castles with different colours. They all pay differently, with the card royal castles being low-win symbols. The symbols can combine to occupy more positions on the grid and offer bigger payouts.

Build Your Empire Slot on Mobile

The Build Your Empire online slot was developed using the HTML5 platform, making it available across all Android and iOS devices. You can spin it on the go on any smartphone or tablet released in the past 5 years or so. No need to download the slot app – you can play it on instant play platforms.

To start playing, set your bet between £0.2 and £20 per spin. The higher your bet goes, the higher the possible Multipliers. Instead of reels spinning, the symbols will appear out of the blue on the grid with a cool animation. Should you land 4 or more in a cluster, you’ll get a payout. Of course, you should cross your fingers for a higher count as they deliver bigger payouts.

In both the base game and Bonus round, Racking Up Riches is the main feature. Whenever a cluster of 4 or more symbols lands on the grid, they can combine to occupy more positions. No more than 4 matching symbols can occupy a single spot. There can be 2, 3, or 4 instances of any symbol, with the highest count of matching symbols transforming into a new one.

The symbol combination rules are pretty complex, so it might be a good idea to read the guide before you play the Build Your Empire slot for real money.

Whenever 3 or 4 blazing forges land, you gain access to the Free Spins round. Three of these symbols will give you 8 free games, while 4 deliver 30. The Scatter only appears on the corner of the grid.

At the start of the Bonus round, a group of 1-3 adjacent and matching symbols will be randomly placed on the grid. The other features, such as Racking Up Riches, are still active and can deliver pretty solid payouts.

The RTP of the Build Your Empire slot is dead straight at 96%. This is pretty solid for a medium volatile slot with wins over 1,000x at stake. That’s not too high for a Cluster Pays slot game, but still pretty solid for most players.

In Build Your Empire, you have a chance to start your own kingdom from scratch. You’ll use a different combination of symbols for it and a cool feature that’s active in both the base game and Bonus round.

While it may not be the highest-paying slot in 2021, Build Your Empire is certainly fun. Play it for free or real money at our recommended online slot sites and be the ruler of your own kingdom.

Who developed the Build Your Empire slot?

The Build Your Empire online slot was developed by High 5 Games. It’s one of the most exciting studios on the market, having released hits such as Lucky Lassie and Triple Double DaVinci Diamonds.

The RTP is set straight at 96%. That’s the industry average for highly volatile slot games and over the average for medium variance slots such as Build Your Empire.

What kind of symbols are on the Build Your Empire grid?

As a medieval-themed slot game, you can expect to see rare gems, fireballs, wood, and tiny castles with gems attached to them.

Is Build Your Empire a Megaways slot?

No, it’s not. The slot uses a different kind of engine. Cluster Pays are similar to Megaways, but you don’t get thousands of ways to win. It relies on clusters of symbols.

Does the Build Your Empire slot have a jackpot?

No, it doesn’t. Build Your Empire isn’t a jackpot slot, but you can land pretty solid payouts if you land dozens of symbols in clusters.

How does the Cluster Pays engine work?

The Cluster Pays engine needs 4 matching symbols in a cluster to deliver payouts. In this slot, the maximum number of symbols for the highest payouts is 48.

Is Build Your Empire a highly volatile slot game?

No, and that’s a good thing. Build Your Empire is a medium variance slot, so you can expect solid and varied wins.

Is the Build Your Empire slot available on mobile devices?

Yes, it is. You can play it on the go on your Android and iOS devices.

Should the Build Your Empire slot be downloaded to play on the go?

Since it was developed on the HTML5 platform, you can play the slot straight from your mobile browser.

When was the Build Your Empire slot released?

The Build Your Empire slot was released on September 30, 2021.