Since its release in 2016, Playtech’s Buffalo Blitz has been a bonafide hit. Players were impressed by the rampaging win potential across 4,096 paylines. It ended up as one of the top ... Read Full Review 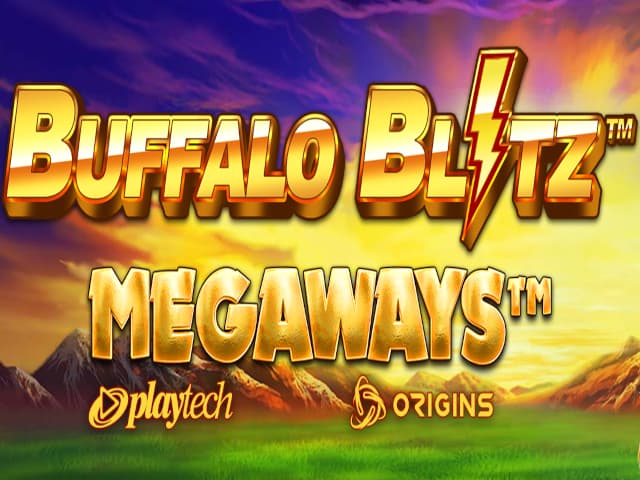 Since its release in 2016, Playtech’s Buffalo Blitz has been a bonafide hit. Players were impressed by the rampaging win potential across 4,096 paylines. It ended up as one of the top Playtech slots of all time, still going strong half a decade after its release. Playtech appointed its Origins studio to lead the plans for a sequel, this time with the Megaways feature on top.

Simply titled Buffalo Blitz Megaways, it’s an improvement over the original in almost all areas. This buffalo is bigger, bolder, and meatier, thanks to the Megaways engine. It comes with a total of 117,649 ways to win that can deliver line wins up to 20,000x your stake. On top of it all, there are four Blitz jackpots that can spice up your wins.

The Buffalo Blitz Megaways slot has retained some of the original’s best features and mechanics while delivering fresh content. You can play it for fun or real money in any Playtech online casino.

If you’ve played one Megaways title, you’ve played them all. Buffalo Blitz Megaways is your typical Megaways slot game with 6 vertical reels and a horizontal one on top. As an Americana tale, it’s set against green plains with a sun setting behind a mountain in the background. It’s a serene setting that goes in line with the soundtrack that will pick up as you hit big wins.

Playing the game is fairly simple. The controls are on the right, including the bet picked, spin, and Autoplay buttons. The symbols are divided between 5 low-paying card royals and premiums. As expected, the buffalo pays the most – 6x your stake for 6 on a line. The payout is lower than expected, but that’s common for Megaways slot titles.

Overall, it’s an upgraded audio-visual experience as expected out of a Playtech slot and a big improvement upon the original.

The original Buffalo Blitz slot was available on mobile devices, and this one is no different. You can play Buffalo Blitz Megaways on a range of Android and iOS smartphones and tablets for fun or real money.

The first thing you need to do before you start playing is set your bet. Your options range between £0.10 and £200 per spin, so the slot is suitable for new and seasoned spinners. When ready, hit the Spin button to make those reels turn with a nice animation.

This is a highly volatile slot, so it pays to start small and build your bankroll up before risking more money. A bit surprisingly, there are no cascading reels in this slot. Landing winning combinations simply takes you to a new spin, but since there are no classic reels, the number of ways to win can go pretty high on each spin.

Landing the buffalo pays regular sums of money, but the stacked version of this symbol pays up to 120x for 6 symbols in sight. The diamond Wild substitutes for all symbols and appears on the extra horizontal reel. That extra reel on top can be involved in winning combinations and pays accordingly.

Before the round begins, you’re presented with one of 4 free games rounds:

All Bonus rounds play the same, with the only difference in the number of free spins and Multiplier values. If you land more than one Wild Multiplier in the Free Spins Round, their values are added up.

Finally, the Bonus Round can be retriggered as long as you land 3 or more Scatters. The maximum free spins count is 1,000, although we doubt any player can hit as much.

As for the Blitz jackpots, they can be triggered randomly on any spin. These are 4 Progressive Jackpots that can be won if you reveal 3 matching symbols under the diamonds.

The RPT of the Buffalo Blitz Megaways slot is 96.29%, which is great for a highly volatile Megaways slot. With the greatest multipliers, you can win up to 20,000x your bet in the Bonus Round.

Buffalo Blitz Megaways is a big improvement upon the original in welcoming ways. It’s got the Megaways engine to thank for most of those improvements. The 117,649 ways to win offer great winning potential, allowing players to hit wins up to 20,000x their stakes.

Overall, it’s a great addition to the Playtech catalogue found in our recommended online slot sites, and a worthy sequel to the popular original.

The Buffalo Blitz Megaways slot was developed by Playtech Origins and released by the studio. It’s one of the latest additions to the popular series and a sequel to the original 2016 hit.

The RTP of the Buffalo Blitz Megaways slot is 96.29%. That’s higher than expected for a Megaways title of high variance.

Yes, as the name suggests, this is a Megaways slot game. It’s the first Megaways entry into the popular slot series that will surely revisit it.

Yes, Buffalo Blitz Megaways is a highly volatile slot game. It means that you should be careful with your bets and start with smaller ones before you risk a few.

Does the slot have a Free Spins Round?

Yes, it does. As a matter of fact, it has 3 plus a Mystery Free Spins choice that can award any of the 3 you can pick yourself.

Can I play the Buffalo Blitz Megaways slot for fun?

Yes, the slot’s demo mode can be tried in any Playtech casino. However, you won’t be able to play for fun if you’re from the UK due to current regulations.

Yes, it is. The slot can be played on the go via your favourite mobile browser on both Android and iOS devices.

How do I hit the jackpot in the Buffalo Blitz Megaways slot?

The Buffalo Blitz Megaways offers four progressive Blitz jackpots. These are network jackpots that can be hit randomly on each spin. In order to get your award, you will have to click on diamonds and reveal 3 matching symbols beneath them.

Which slots are similar to Buffalo Blitz Megaways?

The original Buffalo Blitz slot game is mostly similar to this one but lacks the Megaways engine. Buffalo Blitz II is another slot in the same series that will remind you of Buffalo Blitz Megaways.

When was the Buffalo Blitz Megaways slot released?

The Buffalo Blitz Megaways was released on December 6, 2021.