Big Bass Bonanza by Pragmatic Play was a huge hit when it was released in 2020. It’s still among the best Pragmatic slots of all time, famous for its great winning potential ... Read Full Review 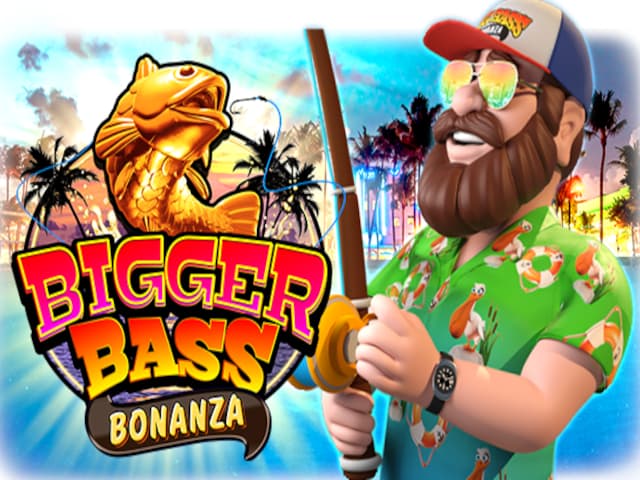 Big Bass Bonanza by Pragmatic Play was a huge hit when it was released in 2020. It’s still among the best Pragmatic slots of all time, famous for its great winning potential paired with simple yet fun gameplay. Thanks to the popularity of the slot, the studio instantly began working on a sequel named Bigger Bass Bonanza and released in 2021.

As the name suggests, this slot is bigger and better than its predecessor. It doubles the winning potential and adds 2 extra paylines as well as bigger fish to fry on the reels. The Bigger Bass Bonanza slot also looks better while retaining the features of the original.

Available in any Pragmatic Play casino for free and real money, Bigger Bass Bonanza is a bonanza like you’ll rarely find online.

If you’ve played the original Big Bass Bonanza slot, you know what to expect. Bigger Bass Bonanza uses the same layout and design as its predecessor but with updated graphics. The reels are separated by water bubbles flowing up, and unsurprisingly, the action is set underwater.

On the reels, you’ll find fishing paraphernalia that pays more than the regular low-win card royals. The fishing boat is chief among them, delivering prizes worth 200x your stake for five of a kind. The fishing rod is next in line, with the other symbols paying significantly less. Of course, the slot also uses a Wild and Scatter, which play their famous roles.

The audio has been updated with a new soundtrack that has Miami vibe sounds from the 1980s. It makes perfect sense when you check the background and see the neon-lit landscape – the slot is most likely located in Florida, if not Miami specifically.

The Bigger Bass Bonanza slot is designed on the HTML5 platform. It is available on a wide range of Android and iOS smartphones and tablets, allowing you to spin it on the go with no download required.

The game begins when you place your first bet. You can change between coins and cash amounts. The minimum is £0.12, while the maximum bet you can place is £240 per spin. Hit the Spin button and get ready to reel some big fish in.

As soon as you spin the reels, you’ll notice that the base game is pretty straightforward. Land the right combination of symbols for lower or higher payouts, which can be completed by Wilds. The money symbol is the sole special feature. Whenever it lands on the reels, it will come with a randomly attached value.

Fish symbols are money symbols too, paying the value attached to them. They’re active during the Bonus Round too, which is triggered by 3 or more Scatters.

Three or more Scatters will give you access to the Free Spins round. You get 10 free games for 3 and double that number for 5 Scatters. During this round, every Wild that lands on the reels collects the values from the money fish symbols. At the same time, the Wilds are also collected in a special metre.

Every 4 Wild collected retriggers, the Free Spins round with a new batch of 10. Additionally, it increases the Win Multiplier to x2 on the first retrigger and x2 and x3 for the second and third.

The Free Spins round uses special reels. The Bigger Bass Bonanza online slot reaches its full winning potential in it.

The RTP of the Bigger Bass Bonanza slot is set at 96.71%, much like the original. However, it uses 12 reels this time and has double the winning potential at 4,000x your bet.

The Big Bass Bonanza slot was a great game when it was released, and Bigger Bass Bonanza takes everything it had to offer and makes it bigger and better. It’s a slot that offers bigger fish to fry if you know how to reel them in.

Play it for free to learn how it works, then splash the cash on these fishing rods and enjoy the biggest bass you’ve ever seen at our recommended online casinos.

The Bigger Bass Bonanza slot was developed by the Reel Kingdom, a Pragmatic Play satellite. Of course, it was released on Pragmatic’s platform, which has a global reach.

The RTP is set to 96.71%, just like the original. We have to mention that the number is pretty high, even for highly volatile slots.

No, it isn’t. The slot doesn’t use any special mechanic to deliver wins. Instead, it relies on regular combinations, Wilds, and Multipliers to boost your payouts.

Can I play the Bigger Bass Bonanza slot for free?

Yes, you can. Most players can easily access the demo, although it will be locked to UK slot fans who can’t play slots for free due to current UKGC regulations.

Yes, the Bigger Bass Bonanza slot was developed on the HTML5 platform. As such, it can be played straight from mobile browsers with ease.

We can’t tell you what the best Bigger Bass Bonanza slot app is. You have to explore different apps on your own and find one that suits your preferences the most.

What do the money symbols in Bigger Bass Bonanza do?

The money fish symbols can appear randomly on the screen with a randomly attached value. The Wild collects these values in the Free Spins round and can boost your winnings pretty nicely.

What’s the best casino where I can play the Bigger Bass Bonanza slot?

Can I win real money by playing the Bigger Bass Bonanza slot online?

Yes, you can. The slot is available for free and real money. Deposit and play for real money, and you can expect real money returns.

When was the Bigger Bass Bonanza slot released?

The Bigger Bass Bonanza online slot was released on September 16, 2021.