Who doesn’t love big cats? Well, only when we see them on TV – no one can ignore the fact they’re glorious. Meeting them in person can go sideways, so we’ll stick ... Read Full Review 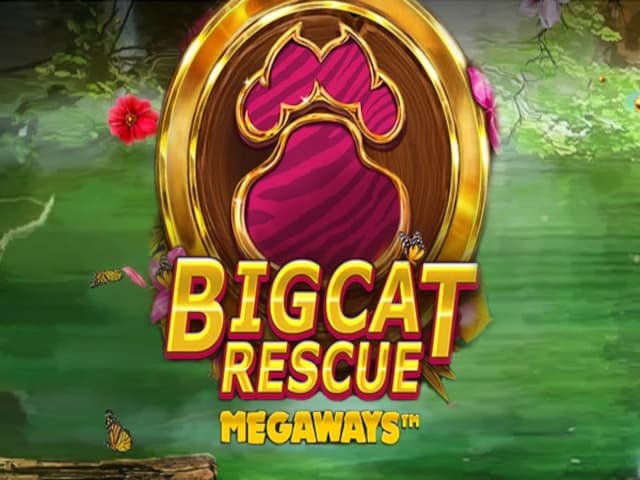 Who doesn’t love big cats? Well, only when we see them on TV – no one can ignore the fact they’re glorious. Meeting them in person can go sideways, so we’ll stick to watching them on TV or enjoying their feats in slots. Big Cat Rescue Megaways is one such game, appropriately developed by a studio named Red Tiger.

The name of the slot will be familiar to fans of Netflix’s Tiger King show. It’s the name of the Big Cat Rescue park in Florida run by Carole Baskin, the woman who eccentric Tiger King Joe Exotic tried to murder. Without going into the crazy details of that story, we’ll stick with the rescue park that features all kinds of exotic big cats.

While the actual park is no longer open to the public, it lives on as a perfect slot theme. This is the second slot in Red Tiger’s Tiger King series after the release of the insane Joe Exotic. This one runs on Big Time Gaming’s Megaways engine, with the popular variable reel mechanic paying big money to the luckiest players.

Big Cat Rescue Megaways is your typical Megaways slot. It has that familiar 6-7 setup, with 2-7 symbols landing per reel. There’s no horizontal reel this time, but everything else is the same as in other Megaways titles. Red Tiger is known for sharp graphics, and this slot is no exception. It looks and feels great, not to mention the sound effects that will take you on a tour through the damned park.

As expected, the tiger pays most among the premiums (20x for six) which also include a white tiger, panthers, leopards, servals, and bobcats. The low-win symbol list includes card royals. A white tiger wild stack substitutes for all symbols except the Scatter.

Cool fact – some of the slot’s proceeds will go toward saving the cats. Hats off to the studio for that.

You can easily spin the Big Cat Rescue Megaways slot on your phone since it was developed on the HTML5 platform. No need to download any slot apps – just open your favourite online casino via a browser and enjoy.

Place a bet from £0.10 to £10 per spin and hit the Spin button to start. As usual, Megaways slots rely on cascades to deliver continuous wins. This time they’re called chain reactions, but it’s basically the same thing. Every win triggers a cascade, and as long as there are winning symbols landing on the reels, these chain reactions will continue.

The good news is that those White Tiger Wild Stacks involved in chain reactions can multiply your wins. These land on the 3rd reel only and trigger the White Tiger Mega Wild feature. These Wild Stacks contain Multipliers up to x7, and when two or more appear, their Multipliers are combined. The highest possible Multiplier you can land is x343.

New Scatters will give you an extra spin, so you can milk this slot bonus for a lot of spins and hopefully wins.

For a highly volatile slot, the RTP of 95.75% looks a bit low. However, the chain reactions and bonus features make up for the lower RTP in a slot that can pay up to 10,481x the bet.

If you loved the Tiger King show, spinning the Big Cat Rescue Megaways slot is a must. It’s better than Joe Exotic thanks to the Megaways engine and because a portion of the proceeds will go to saving the big cats.

Everything looks and feels great on the slot side too, making Big Cat Rescue Megaways a game you don’t want to miss at our recommended online slot sites.

The Big Cat Rescue Megaways slot was developed and published by Red Tiger. It’s one of the top studios on the market, known for its collaborations with NetEnt. The biggest slots released by the studio include Gonzo’s Quest Megaways and Piggy Riches Megaways.

The RTP is set a bit lower at 95.75%, which is strange for a highly volatile slot, but not a Megaways title. Developers often lower the RTP due to the cascade wins and these slots’ great winning potential in general.

How low do the bets go in the Big Cat Rescue Megaways slot?

You can place a minimum bet of only £0.10 on the Big Cat Rescue Megaways slot game. It’s the right bet for someone trying the slot for the first time or those who have just ventured into the world of online slots.

Is there a jackpot to hit in the Big Cat Rescue Megaways slot?

No, and Megaways slots rarely have jackpots. There might be some with a fixed jackpot, but Big Cat Rescue Megaways is not among them. Which doesn’t mean it doesn’t pay well. On the contrary, the slot has solid winning potential and can pay a max of nearly 10,500x the bet.

How do I get to the Free Spins Round in the Big Cat Rescue Megaways slot?

Players can access the Free Spins Round traditionally by landing three Scatters (Carole Baskin). Before the bonus action begins, a wheel is spun to reveal the number of free games and Multipliers. The maximum is 22 free spins with a starting multiplier of x10.

What do the White Tiger Stacks do in the Big Cat Rescue Megaways slot?

The White Tiger Stacks play the role of a Wild and trigger a special feature. When it occurs, the Mega Wilds land stacked with Multipliers going as high as x7. If two or more appear in a combination, their multipliers are combined.

How many paylines does the Big Cat Rescue Megaways slot have?

The Big Cat Rescue Megaways slot doesn’t rely on traditional paylines. Instead, it’s a Megaways slot with up to 117,649 ways to win. The number of winning ways depends on the number of symbols that land per reel, which ranges from 2 to 7.

Is there a promo code to use on the Big Cat Rescue Megaways online slot?

We don’t have a promo code to share for the Big Cat Rescue Megaways online slot. Check our website regularly, though – there might be one to use on the slot soon. We have a range of promo codes for the newest slots, so it pays to bookmark our site and check it every day.

Which slots are similar to Big Cat Rescue Megaways?

Joe Exotic by Red Tiger is the first slot that springs to mind in relation to Big Cat Rescue Megaways. It’s not a Megaways slot, but it’s based on the same story. If you’re looking for big cat slots, Wild Cats Multiline by Red Tiger and BTG’s King of Cats are solid choices.

When was the Big Cat Rescue Megaways slot released?