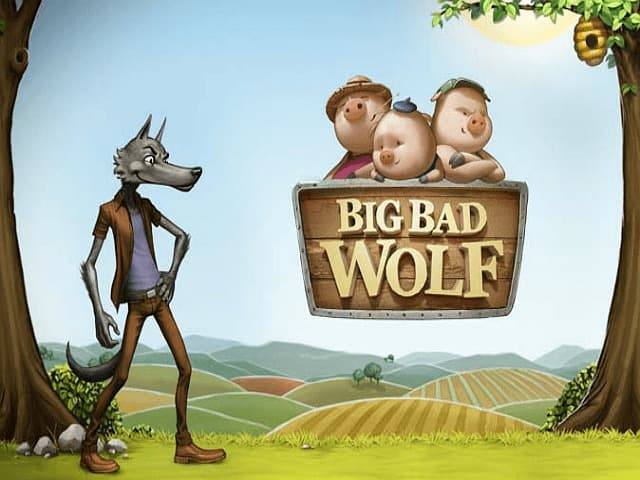 Big Bad Wolf is a Quickspin slot game that's been released via Playtech's Virtue Fusion platform. This fun and rewarding falling blocks slot game is themed around the tale of three little pigs, and you'll also get to see the Wolf trying to blow their house away! The game was released in 2012.

While Quickspin is owned by Playtech, it's clear this is a Quickspin game when you look at the console, which is different than what Playtech normally use. The 25 paylines are fixed, and your bets can range from £0.25 to £100, in 15 preset levels. When you choose your bet, the paytable will be adjusted accordingly, and it will always show the exact amounts you'll be getting during the game. There is an Autoplay button you can use if Spin is too slow for you.

The game uses a 5x3 board, and the 15 symbols will fall from above when you click Spin. When you land a win, the winning blocks will disaapear and will be replaced by new ones. This is the most important aspect of this game, as every two consecutive wins you get will transform one Pig into its Wild version. After six consecutive wins on the same spin, you'll have three Wild Pigs. There is also a regular Wild, the Beehive. Wolf is the Scatter that awards 10 free spins when you land at least three.

It's important to note that the game doesn't pay often at all, which means this is a long distance kind of game, and it's rare to see several consecutive wins on the same spin, though it does happen sometimes. Keep this in mind when choosing your bet size. The main bonus feature is also super rare even though the game has theoretical return to player (RTP) of 97.34%, making it one of the loosest quality slots released in the last decade. But you do need to wait for a long time for that big win. Once you do start getting Pig Wilds it gets much easier, and with three Wild Pigs you're likely to win some four or five more times before the feature ends.

Blowing Down the House is the main bonus feature, and it gets triggered when you land three or more Wolf symbols. You'll get 10 free spins to get you started, and you'll be winning more as the feature progresses. You're collecting Moon symbols that land only on reel 5, and to blow down the wood house you need three of them. If you do get them you'll progress to the second level and will get 2 extra free spins. You need three more Moon symbols to blow down the brick house, and you'll again get 2 extra free spins and a x2 win multiplier. Unlike the story, we only have two houses here, not three. This bonus feature will give you at least a decent win, with a chance to win a lot if you start getting those Pig Wilds and if you're lucky with the Moon symbols. In total you'll get 14 free spins if you reach the end of the feature.

Big Bad Wolf is a peculiar slot game as it keeps things really tight most of the time, and you feel as if you can't land a win at all. But then it opens up, you enter a series of re-spin wins, start getting those Pig Wilds, and you land a big win. It's the same with the Blowing Down the House feature, which may be only decent sometimes, but it also gives you a chance to win huge amounts of money. Patience is the key with this excellent slot game, so if you're playing at one of the best online casinos, you might need to play at least 500-1000 spins to experience all the game has to offer, if not more. Big Bad Wolf will give an incredible win to those players who are persistent enough.