Thrash Metal fans can now play a slot themed around Canadian band Annihilator. It’s a 5-reel, 10-line game that you can play on PCs and mobiles at some of the top online ... Read Full Review 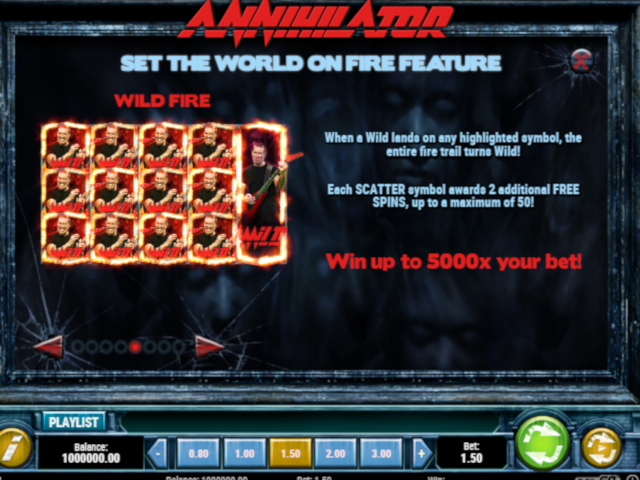 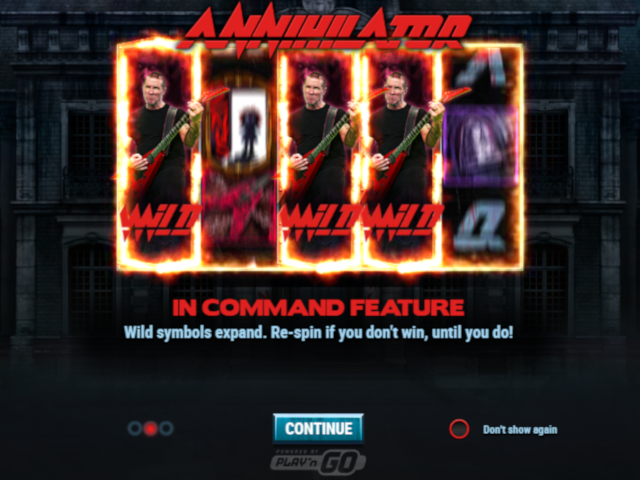 Thrash Metal fans can now play a slot themed around Canadian band Annihilator. It’s a 5-reel, 10-line game that you can play on PCs and mobiles at some of the top online casinos. With no less than 8 of their tracks featured, the Annihilator slot machine is hugely popular with those who follow the band, as well as anyone looking for a feature-filled game.

Bonuses include expanding wilds, and free spins where wilds move across the reels. Play the Annihilator online slot for real cash, and with the right combination of symbols, you can win 40,000.00 from a single spin at the highest stakes.

Slots based on characters, bands, movies, and so on, often attract people who have never spun the reels of a slot machine in their lives. Play’n Go have designed the Annihilator slot to be easy enough for rookies to enjoy, but packed enough into it for experienced gamblers to enjoy as well.

You can play for between 0.10 and 100.00 per spin with online casinos, using a straightforward set of control buttons to select your bet level. Other buttons trigger automatic spins and fastplay modes, but these are just options at use as you wish.

Take a look at the paytable, via an ‘I’ button below the reels to see how much symbols pay out when landing from the left side across any of the 10 lines. Because it’s an online game, Annihilator can pay back more in winnings than land-based slots tend to. Online sites are less expensive to run, and of course, the ones we select are all fully licensed, fair, and secure.

If you like to play slots wherever and whenever, then going mobile is the answer. Fortunately, the Annihilator slots game is optimized for playing on iOS, Android, and Windows smartphones and tablets.

The symbols, features, options, and importantly, soundtrack are just the same on any device. Some of the control buttons are moved around to make it easier to play on a phone.

The band was founded in 1984 and still headed by frontman James Waters. He appears as the highest-paying symbol, and also the wild, who acts as others if needed to complete winning lines. Other high value symbols include various album covers, while metal-effect playing card symbols are worth less.

It’s a high volatility slot game where the relatively long gaps between winning spins can be offset by comparatively high prizes. Overall, it pays back 96.2% of stakes as winnings.

Wild symbols can expand at random to fill their reels. If this ‘In Command’ feature doesn’t result in a win, the wild locks in place as other reels respin. This carries on until you land a prize-winning combination.

In the Fun Palace round, Clare doll symbols in any 3 places lead you to the palace, where you discover dolls lined up. Pick from these symbols to unlock prizes of between 1x and 5x your stake after which you get a second pick. If you find a multiplier of between 10x and 50x, the round ends.

Devil scatter symbol launch the World on Fire free spins. You get 8 extra spins, with expanded wilds in each. These wilds move around the reels, leaving trails of fire, and if another wild lands in the flames, it becomes a second expanded wild symbol.

It’s possible to land a win of 400x your total bet, and if you have the maximum bet in play, that’s a prize of 40,000.00. It’s less than many games though, and we found that other prizes during can be quite high to compensate for this.

Our Verdict on Annihilator Online Slot

The music of Annihilator isn’t for everyone, and if you’re not a fan, then it probably won’t become one of your favourites. Check out other music themed games, like the Jimi Hendrix slot from NetEnt of you like classic rock.

But fans of the band, will certainly enjoy the looks, sounds, and features of the Annihilator online slots game. Bonuses such as expanding wild symbols, reel re-spins, and roaming wilds can be highly rewarding. The Fun Palace round is a bit creepy, but that’s part of the Annihilator style.

Our favourite Play’n Go online and mobile casinos carry Annihilator and the rest of this hugely popular range. The best sites also have some great welcome bonus packages, such as free games and extra credits waiting for you to collect.