Age of the Gods Norse: Gods and Giants Slot

The Age of the Gods series of real money online and mobile slots from Playtech has been a great success. While many of the games revolve around ancient Greek deities, the Age ... Read Full Review

Play Age of the Gods Norse: Gods and Giants for Free Now!

Playtech - Age of the Gods Norse: Gods and Giants 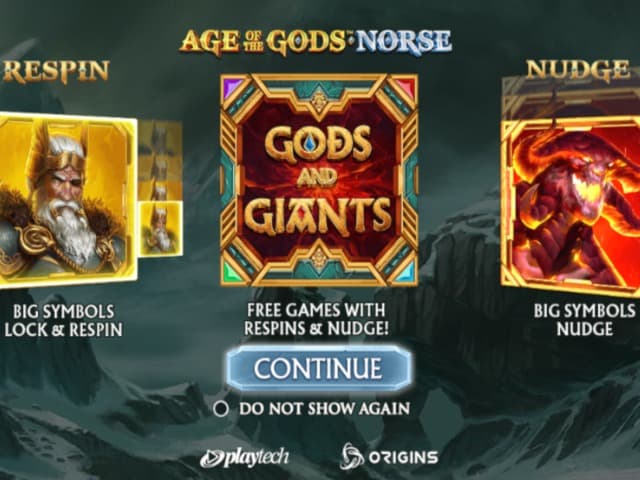 Age of the Gods Norse: Gods and Giants Review

The Age of the Gods series of real money online and mobile slots from Playtech has been a great success. While many of the games revolve around ancient Greek deities, the Age of the Gods Norse: Gods and Giants online slot features Scandinavian legends such as Thor, Odin, and Frost Giants.

It’s a highly volatile game that plays out over 5 reels and 50 paylines. The impressive visuals set the reels in a suitably Nordic landscape of mountains and snow, while the symbols are designed with lots of attention to detail. The various characters share the reels with runes, Viking-style emblems and a huge serpent.

Features of the Age of the Gods Norse: Gods and Giants slots game include wild symbols, and giant symbols that trigger respins when they fill whole blocks on the reels. It also has the progressive jackpot feature seen across the whole range. You can win 1000x your bet, or up to 300,000.00 at the maximum stakes when you play at our recommended online casinos.

Controls & Setup of Age of the Gods Norse: Gods and Giants Slot

To ensure that it attracts a wide a range of players, the Age of the Gods Norse: Gods and Giants online slot uses a simple set of controls that still offer plenty of options and a wide bet range. You can play for stakes between 0.20 and 300.00 per spin.

Just click arrow buttons to change stakes, and the other controls are also user-friendly. Autoplay and Turbo options are available, while the ‘I’ button opens a paytable. This shows you how much each symbol is worth, and how the bonuses work, including the progressive jackpots.

Those who like to play at mobile casinos on Android, iOS, or Windows smartphones and tablets are covered. The mobile-compatible game looks and plays in exactly the same way as the desktop version.

Gameplay Features of Age of the Gods Norse: Gods and Giants Online Slot

The high volatility means that you could see longer than average gaps between winning spins, but high payouts to make up for it. The runes pay less, so expect to see them more than Thor, Loki, Odin, serpents, or giants.

A Viking-style ‘W’ is the wild symbol, and this helps to complete a winning sequence by acting as others if needed. Look out for huge symbols filling a 3x3 block in the middle of the reels. These can move left or right to help create a win, but if they don’t pay out right away, the remaining reels respin, to give you a second chance at grabbing a prize.

In the Power Nudge feature, giant symbols can move up or down to fully cover the middle reels.

If the game logo turns up in a 3x3 block, it launches a free spins bonus round. During these, all symbols in the middle 3 reels are giant-sized, and the symbols on the outer reels are stacked, ensuring plenty of big wins. Only high value symbols are used, with the runes removed for the duration of the free games.

You can win a series-wide progressive jackpot in any spin. The Daily Jackpot drops within a certain time every 24 hours, while the Extra and Ultimate prizes land get paid at any time.

While the biggest win in the base games is equal to 1,000x your stake, the Ultimate progressive jackpot can reach a vast amount. High volatility games like the Age of the Gods Norse: Gods and Giants slot from Playtech give you exciting gameplay, although the average RTP of this game is 94.38%, which is a little lower than we like to see.

Our Age of the Gods Norse: Gods and Giants Slot Machine Rating

This is a great addition to the Age of the Gods range, much like the recent Age of the Gods Norse: Ways of Thunder release. The characters are as popular as ever and it’s become one of the most successful of all. We found that the oversized symbols were a big help in landing wins, and once the free games begin, you are almost guaranteed to get plenty of winning spins.

Be sure to play Age of the Gods Norse: Gods and Giants, along with the rest of the Playtech library at the top-quality online and mobile casinos selected for you at SlotSource.