We’ve always been taught that there are four elements in nature, but according to 4ThePlayer, there are seven. At least that’s what the studio believes in its real money slot 7 Elements, ... Read Full Review 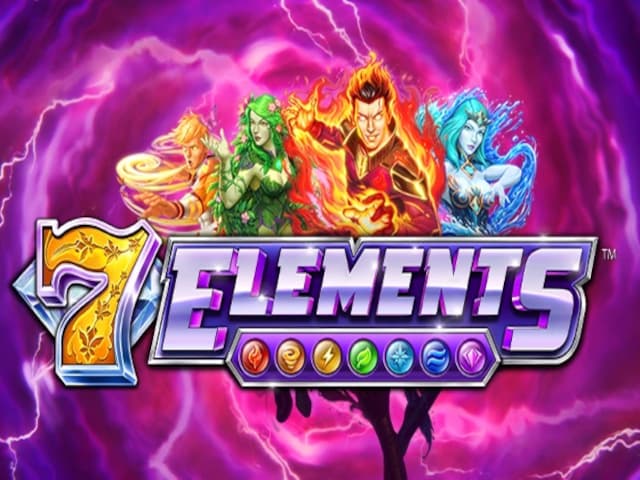 We’ve always been taught that there are four elements in nature, but according to 4ThePlayer, there are seven. At least that’s what the studio believes in its real money slot 7 Elements, a superhero slot where each of the characters is influenced by a mystical element one way or another.

A 4,096-ways-to-win slot of high volatility, 7 Elements has an RTP of 95%. It’s certainly lower than expected, but don’t judge before you’ve seen all the features. With a bit of luck and all special features triggered, this is a slot that can pay up to 25,000x the bet.

The 7 Elements slot uses the Future Powers mechanic, a new and innovative gameplay feature that introduces new modifiers over time. The more you play, the more modifiers you unlock, as the feature is time-based. It can also upgrade the Bonus Round where big wins lie.

As mentioned earlier, this is a superhero-themed slot through and through. The four main characters are based on the four well-known elements – earth, water, fire, and air, except this time earth has been replaced by nature. The other three elements are probably tied into the special features as they aren’t on display on the reels.

The four hero premiums pay a maximum of 6x for six of a kind. There’s a golden Lucky 7 Wild that can help you complete winning combinations. The elements appear as low-paying symbols, replacing the ever-present card royals.

4ThePlayer has done a great job with the visuals and the audio. It looks like an animated Hollywood superhero blockbuster, which is the right way to go about this theme.

You can play the 7 Elements online slot on any mobile device. Open your favourite casino from a mobile browser on your Android or iPhone and spin the game in all its glory without a slot app download required.

The action in this superhero flick starts when you place a bet. You can adjust it from £0.10 to £40 per spin. Hit the Spin button to get the reels rolling. Take a look to the left – that’s the current power a random hero has. Right next to it are the More Info and Swap buttons which are self-explanatory – you can learn more about the modifier or swap it for another. As mentioned earlier, you get new powers unlocked the more you play.

These Power modifiers include a random cash prize, double pays, extra spins, double Free Spins Multiplier, Double Stacks, Wild Reels, and extra gems. Of course, in order to benefit from them, you’ll have to score a win with the hero who has the power.

Better action follows in the Bonus Round which is triggered traditionally.

Three or more Diamond Scatters unlock the Elemental Free Spins round with 10 free games. Extra Scatters pay during this round – if you get five, the payout is a whopping 1,000x the bet.

You collect four hero gems during the Bonus to boost your slot free spins with the following modifiers:

Scatters also add an extra gem to each hero in view, boosting their potential payout.

The RTP of the 7 Elements slot is set at 95%, much lower than expected for a very high volatile slot. It has a fantastic winning potential, though, with modifiers allowing payouts up to 25,000x the bet.

7 Elements is a fun superhero slot that introduces a new mechanic which adds new powers (modifiers). It could be a gamechanger if the slot’s popularity rises, with dozens of powers available over time. You could swap for whichever you find fitting, boosting your wins in both the base game and Bonus Round.

With 4,096 ways to win and maximum wins of 25,000x the bet, this is a superhero world worth a visit at the best online casinos.

Who developed the 7 Elements slot?

The 7 Elements slot was released by 4ThePlayer. The studio is known for its partnerships with many studios, releasing a slew of hits including 60 Seconds Heist, 10x Rewind, and 6 Wilds Sharks among others. 7 Elements looks set to be the next big hit from 4ThePlayer.

What’s the minimum bet I can place on 7 Elements?

The minimum bet you can place on the 7 Elements slot is only £0.10 per spin. This amount will delight new players and those who want to try out a strategy without playing the slot for free first. It doesn’t go lower than this in terms of slot bets.

Yes, it is. We wouldn’t say it is extremely volatile, but you should be careful with your bets. If you’re not, you can get stuck in a losing spell and losses will mount up, and that’s not playing responsibly at all.

How does the Future Powers work in the 7 Elements slot?

The Future Powers introduces a new power every day. The more players play the 7 Elements slot, the more new powers will be unlocked. Once the full field of powers is open, you can swap the current hero power with something you find fitting.

Can I swap one power for another?

Yes, you can. That’s the beauty of the Future Powers engine. It might take a while to unlock all the power slots, but there are even better modifiers out there that can boost your wins like nothing else in the base and bonus games.

Is 7 Elements a Megaways slot game?

No, it isn’t. 7 Elements uses a regular math model paired with 4,096 ways to win. These are non-adjustable and give players a unique way to score wins instead of the traditional left-to-right pays. Still, you will need three or more adjacent symbols to win.

Can I play the 7 Elements slot for free?

Yes, you can. The slot’s demo is available in all 4ThePlayer casinos. However, keep in mind that if you’re from the UK, you won’t be able to spin the demo. That’s due to current UKGC regulations which prevent Brits from spinning slots for fun.

How to win big in the 7 Elements online slot?

Winning big involves collecting gems in the Bonus Round or unlocking new Hero powers. The modifiers are key to winning prizes worth thousands of times your stake. With a bit of luck, the maximum you can hit is 25,000x the bet.

Which slots are similar to 7 Elements?

Elemental Gems Megaways is the first slot that springs to mind in relation to the 7 Elements slot. This Pragmatic Play hit is not superhero-themed, but it’s based on the four elements. There are other slots you can try, including Red Tiger’s Wild Elements and Reel Play’s Zodiac Infinity Reels.

When was the 7 Elements slot released?